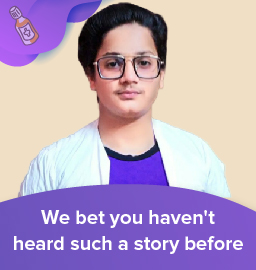 How is BYJU’S Helping Noor Study During The Lockdown?

Like millions of class 10 students across the country, Noor Alam is spending his summer holidays preparing for his board exams that have been rescheduled. “I have all the time to play cricket now, but I can’t go out,” says this student from Lucknow wistfully. A sports enthusiast and a movie lover, Noor has been using this time to catch up on movies and study with the motivation to become a doctor one day. And mind you, Noor doesn’t want to be just any doctor – he wants to be a compassionate one.

“I want to be a doctor and help the poor. Right now in India, the healthcare system isn’t great and only those who have resources can afford a doctor in a private hospital. I want to make sure that poor people have access to doctors who are compassionate,” says the 15-year-old.

What does he mean by a doctor who is compassionate? Hear it from Noor himself. “Nowadays, I feel like doctors treat the disease but not the patient. I have seen this when my grandmother was ill. Her disease was getting treated, but the doctors were not able to understand the pain she was going through. I want to be a doctor who will work with the patient and understand their emotions, and not just work with their disease,” says Noor with kindness well beyond his years.

With big dreams in his eyes, Noor chose BYJU’S – The Learning App as his learning companion when he was in ninth grade. When asked how BYJU’S is helping him in his preparation to meet his goals, Noor said, “From an exam perspective in biology, the major weightage is for diagram- related concepts. But it’s very difficult to properly visualise and understand these diagrams. BYJU’S makes this extremely easy.”

He goes on to add, “With BYJU’S, every video has a story in it and every teacher wants you to have fun. So basically watching a study video is like watching a movie. You have to follow the story and remember the scene and your concepts will be clear.”

With the board exams being delayed nationwide at a critical juncture, we asked Noor how he was continuing with his preparation. The determined Noor said that it was the BYJU’S Live Classes that were helping him. “The BYJU’S Live Classes help in staying in touch with concepts. At the end of every live class, the teachers tell you the important topics to focus on. Since these teachers have themselves given their boards and competitive exams, they know how to guide students well with the right approach,” he added.

When kindness and compassion are the backbones of your ambition, you can touch the lives of millions while bettering your own! Team Storyweavers wishes Noor all the very best for his noble dreams!