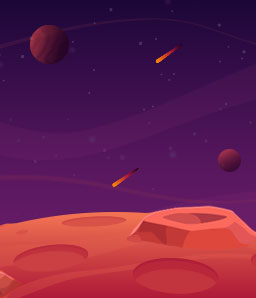 Can NASA Scientists Dig A Hole On Mars?

Did you know there’s a mystery on Mars that has left NASA scientists baffled?

This month we bring to you the intriguing story of one of Mars’ moving inhabitants – the “mole” from the NASA InSight lander.

The InSight lander is a NASA spacecraft that landed on Mars on November 26, 2018. Its mission has two objectives:
1. To understand what the inner parts of the red planet look like
2. To see if there is any tectonic activity on Mars. i.e if the landmass of Mars is built on tectonic plates like on Earth.

We have long known that the Earth is made up of the crust, mantle, and core, but we are yet to know if this is the same for other planets in the solar system. If we can find out what the interiors of Mars look like, we’ll know more about how the rocky planets in our solar system were formed!

While the InSight lander has a lot of interesting equipment to explore Mars, one of the most important apparatus on the mission is the Mars “mole”, a tiny instrument that will help scientists dig on Mars to understand it’s interiors. But here’s the catch, the scientists have to dig a pit on Mars from Earth!

This makes the task complicated and is the start of the mystery that NASA is trying to solve. Here’s what happened.

The Mars mole successfully started digging a hole into the ground on Mars on February 28, 2019. But after a week, it suddenly stopped!

Scientists were baffled! Did the mole hit a rock? Did the machinery stop working? Was a boulder stopping the path of the mole? And if it was, how were we going to move it all the way from Earth!

It took scientists eight-long months with loads of simulated experiments on Earth to realise that Martian soil is different. It’s a lot harder than the soil of Earth because of which the mole didn’t have enough friction to dig!

To help the mole, scientists programmed the robotic arm on the InSight lander, all the way from Earth, to press the mole down so it could continue digging. This technique worked! The mole continued to dig this way from October 15, 2019, to October 27, 2019. But alas! The troubles with digging on Mars didn’t stop. In the process of digging, this time, the mole popped out of the hole!

Now scientists at NASA are trying to figure out how to get the mole back into a position where it can resume digging.

Something as simple as digging a pit becomes infinitely more complex when you have to do it on a whole different planet. But the scientists at NASA have to be lauded for their perseverance! They are not letting distance get in the way of performing their experiments. This is the true spirit of science. To keep going even in the face of failures and difficulties because you are curious about learning.

A lot of these problems could be avoided if we’re able to send astronauts to Mars where they could conduct experiments more easily. If you could become an astronaut for a day, what would you explore on the Red Planet?

Make your own nebula in a jar: Activities for space enthusiasts

10 Scientific Discoveries That Changed The World

50 Facts About The Moon