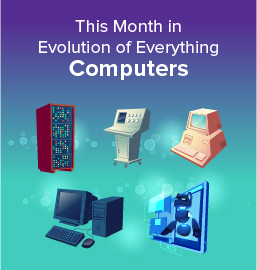 How Computers Evolved: A look at all the generations

It’s 1795 and you’re the captain of a ship at sea. The sea in front of you is inky black. How do you know which direction your ship is going in? Simple! You estimate your location by the position of the stars above! You have a mathematical book that helps you with this, but there’s only one problem. These calculations are made by human mathematicians and they’re not always accurate. Wouldn’t that frustrate you?

That’s exactly what the British scientist Charles Babbage, the father of computers, thought too. Babbage wanted to build a machine that could perform accurate calculations quickly to avoid errors in navigation and engineering. This is when he came up with the design for the first computer called the Difference Engine in 1822.

But did you know that Babbage never actually built a computer? Babbage’s design for the computer was built nearly 120 years after he designed it! Today, computers are indispensable and help us in almost every aspect of our lives. Using the mathematical language called binary (which only uses the digits 0 and 1), computers store huge amounts of information and help us make lightning-fast calculations which we could have not done ourselves.

Let’s look at the journey of the computer right from the start and see how it has evolved to help us practically do everything.

Third-generation computers used integrated circuits that were made by fitting many transistors onto one chip. The development of ICs also gave rise to Moore’s Law that believes that every two years, twice the number of transistors can be fitted into ICs while the cost of the ICs reduces by half. Since the circuits in the ICs are very close to each other, the electricity in the circuit needs to travel a very small distance. This led to faster calculations! The computer still needed an air-conditioned environment to function in.

Fourth-generation computers run on microprocessors which are stamp-sized chips that contain all the important circuits needed for the computer to run. One of the earliest companies that made microprocessors was formed by combining the words integrated and electronics – Intel! These computers were also sometimes called microcomputers because they were so small compared to the computers in the past. The Apple II made by Apple is one of the earliest fourth-generation personal computers ever made and was hugely popular for personal use.

Fifth-generation computers may use neural networks and artificial intelligence and try to make decisions that mimic human beings. They can interpret information and make decisions. Since these computers can learn on their own, we are still figuring out the full extent of how to control them. These computers are used everywhere from entertainment, medicine, research and more. The world’s smallest computer (that can measure the temperature of cell clusters) is smaller than a grain of rice.

With computers going from the size of a room to being smaller than a grain of rice, what do you think will come next in modern computing? Would you like to be a future computer scientist?

Let us know in the comments.