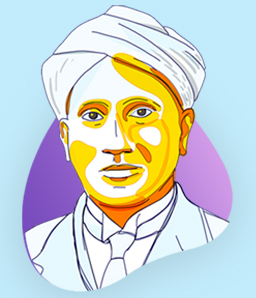 As a kid, you must have often asked these questions:

‘Why is the sea blue?’   ‘Why do clouds appear white in colour?’

The answer to this and many similar questions lies within the realm of “Raman Theory”. Also known as the “Raman Scattering”, the theory helps in analysing the molecular behaviours of a wide range of materials, including gases, liquids and solids.

This brilliant discovery was made on 28 February 1928 by one of the greatest physicist the world has seen – Chandrasekhar Venkata Raman, popularly known as C V Raman.

Born in the year 1888 to a Tamil family, Raman’s father instilled the love for learning into him at a very young age. His constant curiosity and his unbound love for Physics bagged him the role of a physics professor in the Calcutta University. His contributions in the world of Science and the education sector along with his discovery of the Raman Theory led him to become the first Indian to win a Nobel Prize in Science.

As the Nobel committee noted in its speech,

“The Raman effect has opened new routes to our knowledge of the structure of matter and has already given most important results.”

Today, on his 130th birth anniversary, let’s look at some the of  lesser known facts about the Nobel Laureate.

Raman believed that if you ask the right questions ‘nature will open the doors to her secrets’. On this day, we hope you find the inspiration to unlock your highest potential and never quench your thirst for knowledge!