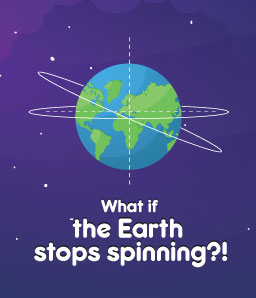 What if the earth stops spinning?

What happens when you wake up every morning? Maybe, you see the sun coming out of the clouds, radiating bright rays through your window. What if you experience day for six months of the year and night for the rest?  Relax! We are not talking about living in the poles. What if you wake up on a bright sunny day and found out it would never end? Confused! Well, this might happen if the earth stops spinning. Of course, it’s unlikely to happen. But think about it – What would happen if the earth stood still?

If the earth stopped spinning (actual rotation speed at the equator is approximately 1200 miles per hour), the atmosphere will continue to exist. However, the bedrock would be wiped clean of all the land masses-the topsoil, rocks, trees and buildings would disappear into the atmosphere. A sudden stop and every object that’s not firmly anchored to the earth would travel in the direction it was moving (tangent to the earth’s surface).

What if earth stops rotating on its axis, but continues revolving?

If the earth stops rotating on its axis but continues to revolve and the axis of rotation maintains the same inclination, the following changes are bound to happen.

If there are any physics enthusiasts out there having the knowledge about the mass of the earth, the radius of the earth, the earth’s escape velocity, the rotation period of the earth, and the average density of the earth, you can calculate a rough estimate of the size of an impactor needed to stop the earth’s rotation. At the moment, scientists are not aware of any objects of that size in the solar system. This means that none of this will happen anytime soon. And that’s definitely a relief!