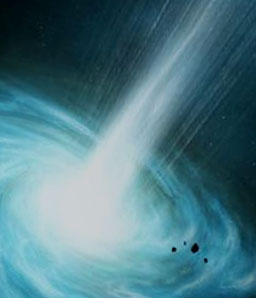 Everything you need to know about a white hole

The story line of the popular science comedy fiction The Hitchhiker’s Guide to the Galaxy talks about the creation of luxury planets by the people of planet Magrathea from matter retrieved from white holes. A white hole is a fascinating hypothetical feature just like the black hole. The most interesting part is that they are both polar opposites and are believed to be quantum entangled.

Black holes occur in surrounding dust, stars, and even when a spaceship passes by, or anything which is too near. On the other hand, white holes radiate light, where matter can escape in the universe. Several decades ago, both were entirely conceptual, but now black holes are associated with many astronomical objects. Surprisingly, a black hole was spotted in the heart of our home galaxy the Milky Way recently.

According to a  research conducted by Shlomo Heller and  Alon Retter in May 2011,a white hole could be the Gamma-ray Burst (GRB 060614).

White holes also have properties of angular momentum,  mass and charge. Like any other mass they also attract matter, but objects falling inside a white hole would actually never reach it’s horizon.

In the world of astrophysics there are many  theoretical phenomena like this. The existence of white hole might be just a concept but questioning, wondering and trying to unravel the mysteries behind them is what increases our knowledge. So, until we find answers to the mysteries of the universe, let’s keep exploring.