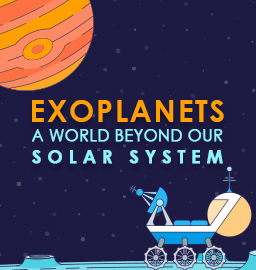 Exoplanets – A World beyond our Solar System

Ever thought about the existence of planets outside our Solar System? Are there any other planets  or only the handful that we know about?

So, in 1995 the scientists discovered that other stars also had planets, just like ours. These are planets beyond our own solar system and were termed as ‘Exoplanets’. Also known as “Extrasolar Planets”, thousands of such planets have been discovered in the past two decades with the help of NASA’s Kepler Space Telescope.

The Kepler Space Telescope, is an observatory that began work in 2009 and is expected to finish its mission in 2018, once it runs out of fuel. As of mid-March 2018, Kepler discovered 2,342 confirmed exoplanets and revealed the existence of perhaps 2,245 others. The total number of planets discovered by all observatories is 3,706.

The youngest exoplanet – K2 33b, is less than 1 million years old. Astronomers inferred the planet’s presence from an enormous hole in the dusty disk that girdles the star. The hole is 10 times the size of Earth’s orbit around the Sun and probably caused by the planet clearing a space in the dust as it orbits the star.Some of these are gigantic planets hugging close to their parent stars and others are icy, some rocky.

Kepler has revealed different types of planets. Besides gas giants and terrestrial planets, it has helped define a whole new class known as “Super-Earths” : planets that are between the size of Earth and Neptune. The nearest exoplanet is Proxima Centauri b,which is located 4.2 light-years (1.3 parsecs) from Earth (the closest star to the Sun).

We hope that you enjoyed reading about Exoplanets. Comment below and let us know what are the topics that you would like us to explore and write on. Thank you.