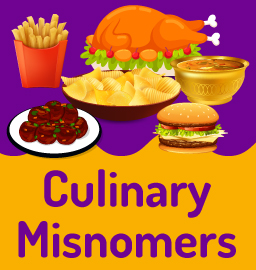 Food That Should Not Be Called What It’s Called!

Do you love Chinese food? What if we told you that the stuff that we eat in the name of Chinese food is far from the actual cuisine of China? Have you heard of the popular dish called Bombay Duck? It’s actually not a duck or any bird at all for that matter. It’s a fish! There is a lot of tasty food out there but their names might not always be telling you the truth about them. Let’s take a look at some of the strange and wonderful dishes that might be hiding an interesting story about how they got their names in the first place.

Both Belgium and France still dispute the claim over French Fries but there’s no single accepted story over who the winner is. One version of the tale states that when American soldiers were stationed in Belgium during WWI, the Belgians served them thinly sliced fried potatoes.  Since French was the language of the Belgian Army, the name “French” was associated with the food. In France itself, French fries go by the name of ‘Pommes Fries’.

Based on which part of the world you are in, the word ‘chips’ can mean different things. While in India we immediately think of crispy thin-cut potato wafers when we hear chips, in the UK, ‘chips’ refer to much thicker cuts of potatoes that are fried in lard or animal fat. What we call chips here are referred to as ‘crisps’ in the UK. In the USA however, what the British call chips are called ‘potato wedges’ or ‘steak fries’. When American say ‘chips’, they mean the same thing as us Indians do!

One would assume that hamburgers must have some amount of ham in them but that is not the case at all. The traditional hamburger is made with beef patties. It actually gets its name from the city of Humburg in Germany. The story goes back to 1847 when a Hamburg steak was served between two pieces of bread. Similarly, the German city of Frankfurt lends its name to Frankfurters, a popular kind of sausage.

A hot favourite in what we call Chinese cuisine is the Manchurian dish. It can be found as a suffix in front of countless food items on menus across India. Gobi, paneer, aloo, mushrooms, chicken – anything can be served in the Manchurian style. One would assume that the name comes from Manchuria, a region in Central China. But actually, this style of dishes originates from Calcutta, which hosts a large immigrant population from China who have added a unique touch to Indian-Chinese cuisine.

While it may sound exotic and feature on menus of fancy restaurants, it should be noted that Mulligatawny Soup actually comes from our very own Indian subcontinent. This watery spicy soup actually derives its name from two Tamil words. ‘Milagu’ which means pepper and ‘Tanni’ which means water. It is basically a cousin of the popular South Indian rasam. But when the British adopted it into their cuisine during the days of colonial rule, they couldn’t quite pronounce it right and that’s how it ended up with such a fancy name!

One would assume that the Turkey bird comes from Turkey the country! But actually, it is native to the North American continent. Although we don’t exactly know how it got its misleading name, the story goes that when Europeans first encountered turkeys in America, they incorrectly identified the birds as a type of guineafowl, which was already being imported into Europe by merchants from Turkey. So they simply nicknamed it as Turkey! The confusion doesn’t end here. In France, Poland, Russia, and other countries including Turkey itself, it is referred to as ‘the Indian bird’, perhaps because of Christopher Columbus reaching the West Indies instead of finding India. Meanwhile, in Portuguese, a turkey is called a ‘Peru’, after the country of the same name!

Often, the food we eat has more to it than meets the eye, especially when it comes to their names. So what if French Fries are not really French or hamburgers don’t contain any ham? It doesn’t stop us from enjoying them all the same. But a glimpse of the strange tales behind their names shows us how quickly nicknames catch on as something travels across different cultures. Bon appetite!

Did you enjoy reading this article? Here are some more lip-smacking reads from our archives! Do you have some interesting food facts you want to share with us? Tell us in the comments below.

5 Summer Drinks to Beat The Heat

Chocolate – The Food of the Gods