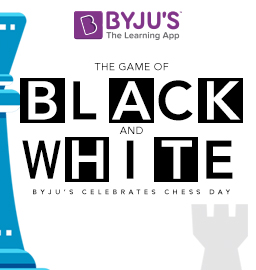 Chess is often referred to as the ‘game of the royals’, and has been a favourite among Indian students for centuries! It is a favourite amongst our BYJU’S students too many of whom are state level and national level achievers in the field. This Chess Day, we look at some Indian Geniuses who reached International fame due to their brilliant chess play. We hope these players inspire you to learn and improve yourself at the game, always aiming to be the best!

Padmini Rout : Padmini Rout has been a world champion since 2008. Her first big win was the World Under-14 Championship and since then she has been getting only laurels for the country. She attained the title of Grandmaster for the first time in 2015, when she defeated Tamir Nabaty of Israel in Gibraltar. Hailing from Odisha, she was felicitated by the Government of Odisha with the Eklavya Award at the age of 15.

Humpy Koneru : A chess genius since her childhood, Koneru bagged three gold medals at the the World Youth Chess Championships (Under-10 Girls, Under-12 girls and Under-14 Girls). She also won the Asian Youth Chess Championship in 1999, she won playing against boys too. Post her win she was honoured with the title ‘Asia’s Youngest Woman International Master’, and her future wins helped her attain the prestigious Arjuna Award and Padma Shri.

Harika Dronavalli : Renowned for her 2016 win at the Fide Women’s Grand Prix, held in China, Harika rose from world number 11 to world number 5 in women’s FIDE rating. Her first win was an Under-9 National Championship which was followed by a Silver medal at the World Youth Chess Championship for Under-10 girls.

Darpan Inani : This 24 year old is India’s only blind chess player to win an international award, he is also the youngest player to have won the National Blind Chess championship. With a never-give-up attitude Darpan is also an aspiring chartered accountant, plays the table and harmonium and has a yellow belt in karate. He was also featured in a chess documentary film-  Algorithms, directed by Ian Mcdonald.

Vidit Santosh Gujrati : Obtaining the title of grandmaster at the age of 18, Vidit is currently the third highest rated chess player in india after Vishwanthan Ananad and Pentala Krishna.