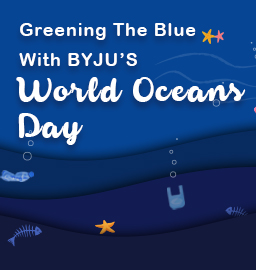 Oceans are the lungs of our planet and a major source of food and medicines. Yet over the past few decades humans have managed to contribute to 80% of the Oceans’ pollution, adding 8 million tonnes of plastic PER YEAR!

World Oceans Day is celebrated to spread awareness about the importance of saving our oceans, in-turn saving ourselves. Dive in with us into the depths of the ocean to learn about some of its secrets and why we should protect them:-

With so much life resting in the hands of our oceans it is important to take drastic measures to save them. You can make your contribution by reducing the use of plastic and recycling waste.

Spread the message on social media using the #worldoceandaywithbyjus #savetheoceanswithbyjus