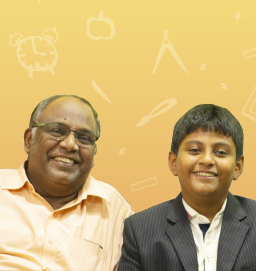 Here’s how BYJU’S helped this father and son bond

Someone once said, “Children are great imitators, so give them something great to imitate.” True, we all have role models, whom we look up to and try to emulate. They inspire us to become better. For BYJU’S student Santosh, it’s his father, K Ranganathan. During our interaction with the dynamic father-son duo, we learnt about Ranganathan’s plans for his son and how his chance encounter with tech-enabled learning helps him and his son become smart learners.

Watch our one-on-one conversation with Santosh and his parents

Excerpts from the interview:

Sitting in the home studio in their Chennai home is Ranganathan playing flute accompanied by Santosh on the drums. The father-son duo is jamming to a popular Tamil song. “We jam every evening after Santosh finishes his homework. That’s the only way I can get him to practise drums and piano. And I get to spend some quality time with him. We, as a family, spend our weekends watching movies or go out for long drives,” he says.

On discovering a new way of learning

A doting father, Ranganathan, encourages Santosh to become a better learner. His ways of learning are rather unconventional (Ranganathan is a self-taught coder). Taking a cue from his father, Santosh prefers to learn through real-life examples and has loads of questions for his father.

We ask Ranganathan what’s his advice for his son? “I always encourage Santosh to learn at his own pace and understand the concepts. I believe once he gets the concepts right, he can solve any problem related to those concepts,” Further, he says, “I have heard that visual learning helps children understand better and faster. When I heard about BYJU’S ways of learning with pre-planned videos, game-like tests and detailed explanation of concepts, I wanted my son to learn from BYJU’S. It’s commendable how the father-son duo sits together and studies from the app.”

We ask Santosh what he would like to become when he grows up. “I have seen my dad work hard in his workshop, and I want to make his life easy. So, I’m putting extra efforts in physics so that I can pursue a career in mechanical engineering,” he says. Kudos to his parents for being his pillars of strength and helping him dream big.