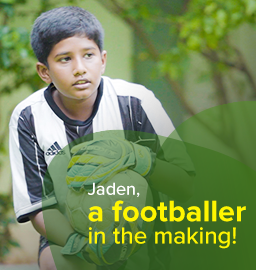 Jaden’s family swears by this quote; be it learning a new language or picking up a new sport, the idea is to keep learning.

Meet sixth-grader Jaden Jonathan James from The HDFC School, Pune. Jaden fell in love with science and football when he was just four! Be it about finding science in everything around him or watching his favourite footballer dribble the ball, Jaden’s curious mind is always looking for answers.

Chasing his passion for football, Jaden enrolled at IOT (India On Track), where he practices football regularly. And for science, he opted for BYJU’S – The Learning App. Jaden’s mother, Malita Anthony Fernandes, says, “What we like about BYJU’S is that it allows him to study at his own pace and learn everything by understanding the fundamentals behind the concepts.” For a family who believes in learning through practical knowledge, BYJU’S – The Learning App is the perfect solution.

Watch Jaden speak about his love for learning, and how BYJU’S is helping him fulfill his dreams of becoming a footballer.