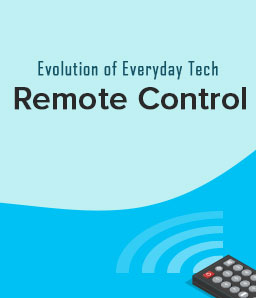 What is the history of Remote Control?

Max and Minnie had a long day at school. All they wanted to do was eat some tasty snacks, watch their favourite TV show, and relax before their evening study sessions. As soon as they turned on the TV,  the question arose – Who commands the remote control? Will they watch Max’s favourite channel or Minnie’s favourite TV show?  The fight for the TV remote continued.

Does this sound familiar? Mostly, the answer is a big yes. But have you wondered what it would be like if there was no remote control?

No surfing through the TV channels at the comfort of the couch!

Electronic gadgets had to be turned on and off manually, every time!

Today, let us look at the history of the remote control and its journey.

The Mystery Control Remote System was invented by a company called Philco in the 1930s. It operated on radio frequencies and was used to control the household radio. Being the most innovative invention of its age, the Philco Mystery Control looked like a rotary telephone without the handset. It was the size of a dictionary and, hence, was not portable.

The first TV remote control came to existence because of one man’s desire to mute the commercials. The man was Eugene F McDonald, the president of Zenith Radio Corporation. He challenged his engineers to create a device that can mute the TV and change the channel at his comfort. The result was the Lazy Bones Remote Control.  The remote was wired, and the cable ran from the TV set to the viewer, meandering across the living room.

The public appreciated the luxury of changing channels from their couch through the wired Lazy Bones Remote. But they did not want to get off the couch to reach the remote. So, Zenith Radio Corporation took a step ahead.

In 1955, Zenith Radio Corporation introduced the first wireless TV remote control and called it Flashmatic Remote Controls. It was operated with the help of four photocells – one in each corner of the TV screen. The remote control had a directional flashlight that could activate the photocells which would switch the sound and video on or off, or change the channels. This pioneering achievement had its limitations. The receptors responded to other light sources like bulbs and sunlight.

In 1956, Zenith Radio Corporation found even more efficient technology – the use of ultrasonic sound waves rather than the light waves. This type of remote control was called the Space Command Remote Control.

In Space Command Remote Control, the high-frequency ultrasonic sound waves were generated using aluminium rods, and the receiver in the TV set picks it up. The processed sound waves switched the TV on or off, or changed the channel, or mute or unmute the sound. The remote was user-friendly. It had multiple buttons for different functions. It also lets the user change the colour of their TV screens.

After 25 years of Ultrasonic remotes, Infrared Technology became the focus. By the 1980s, the remote controls with infrared light beams became popular. They worked on batteries. The low-frequency light beams emitted by remote controls are invisible to the human eye, but the receiver in the TV set could detect it. The shortcoming of this remote control is the need to point the remote control in the direction of its electronic gadget. The flaw is overcome by Radio Frequency Remote Controls.

From the Early Radio Remote to the Infrared Remote Control to Radio Frequency Remote control, remote controls have come a long way. With numerous innovations making their way into the world every season, what would you like to control with a remote? Let us know in the comments below!

Here’s how locks changed over the years

Trace the epic journey of the camera from pinboxes to smartphones

Tracking the Evolution of the Television

How did the refrigerator evolve from icehouse stores?