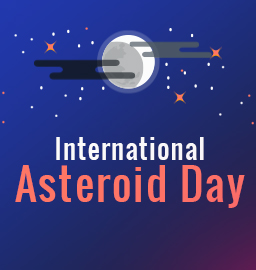 Meteors, solar flares, asteroids, moving stars, nearby supernovas and space shuttle debris. These are just a few of the millions of things in space that threaten Earth. One of the most disastrous ones was an asteroid or comet about 10-15 kilometres in diameter which created the Chicxulub crater about 66 million years ago. This was the impact that allegedly lead to the extinction of dinosaurs, wiping them out from the surface of the earth.

A similar asteroid flattened 2,000 sq kms of land on JULY 30th 1908 in the Stony Tunguska River in Yeniseysk Governorate (now Krasnoyarsk Krai), Russia. It is now known as the Tunguska Event, that caused by the air burst of a meteoroid, luckily with no human casualties.

Asteroid Day is celebrated every year on JULY 30th, to raise awareness about asteroids, and how we can save the Earth from such catastrophic events.

Here are some amazing facts about asteroids we bet you didn’t know!