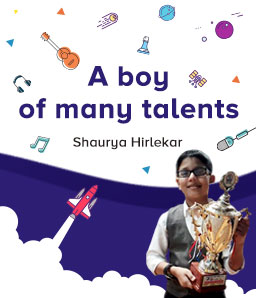 Jack of all trades, master of many – Shaurya Hirlekar

The first thing that strikes you when you meet the multi-faceted whiz kid Shaurya Hirlekar is his love for all things fast. “My favourite superhero is Dr Strange because of how quick and smart he is,” says Shaurya.

He is also a big fan of the character Goku from the Dragon Ball Z series because he is very fast. So, does this BYJU’S student from Pune seek inspiration from his beloved characters? Absolutely! One can only imagine how sharp and quick Shaurya’s grasping skills are when you learn that at just the age of 12, he has mastered more than a dozen art forms. “I don’t like to sit idle and waste time,”, he explains.

His repertoire of talents includes being a maestro of classical singing, the tabla and the guitar – both electric and bass, mind you! He’s practically set to be a one-man-band all by himself!  “Music inspires me. It helps me relax like nothing else,” says Shaurya.

Acknowledging the great amount of potential, his mother runs his YouTube page, meticulously uploading his performances from different musical competitions. But if you thought that music is the only forte of this quick-paced genius, you are quite mistaken! Shaurya is also a seasoned chess player – having played at tournaments at the international level. Although multi-tasking is second nature to Shaurya, he is currently more focused on mastering the tabla these days, admits Rutuja, Shaurya’s mother.

She elaborates further by saying that sports and music go a long way in building the character of a child, and that’s what they’re focusing on with Shaurya as of now. “Academics matter too’, but we don’t have to worry about it with him,” she adds confidently. He has a keen interest and awareness of space, science, robotics and electronics, which are closely tended to by his favourite learning companion – BYJU’S.

“BYJU’S – The Learning App has made our lives so easy. In fact, we don’t know what we’d do without it”, Mrs. Rutuja admits. She goes on to explain how with BYJU’S, not only is Shaurya able to learn things quickly and in the way he likes it, but he is also able to manage his schedule and develop a wholistic conceptual understanding. Visual learning and the option to study anytime and anywhere enables him to devote time to learning other skills.

Shaurya tells us that his interest in certain subjects like biology has significantly increased ever since BYJU’S came into his life. “It is because the videos help me in understanding concepts quickly” he explains.

Fast Forward to the Future

“I want to be an astrophysicist when I grow up! Learning about different planets, galaxies and the various space missions by ISRO and NASA really excites me,” says Shaurya. His mother chimes in with a key piece of advice urging her son to remember his roots. “We understand that his future plans may change. But if he wants to be an astrophysicist someday, we would want him to be a part of ISRO, instead of NASA.”

It is rather rare to find students as diversely talented and possessing such great values as Shaurya. Team Storyweavers wishes this bright mind all the very best for his future endeavours.

What is Vibha’s secret to acing science and arts?

Learn how to make maths easy from a gold medalist