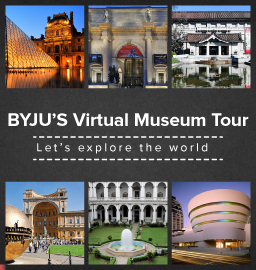 Join in for the Virtual Art Museum Tour

You might be home bound right now, but your imaginations can still fly high. Do you know how? With the help of words! Through words, you can fly high up in the sky and travel to different parts of the world. So what are you waiting for?

This month, let’s have a virtual world tour, where we swim across oceans, fly past sandy deserts, and travel into space with famous astronauts, all with the power of words and a little help from images too!

So be prepared this month, as we start our virtual tour right from our couch. And our first stopover is – seven mesmerising museums of the world. These museums will help you learn about art, history, science, and the enticing stories behind their structure. Let’s get started.

The Musée du Louvre or the Louvre Museum is the largest art museum in the world. It was a medieval fortress and the palace of the kings of France until two centuries ago. The museum has a huge collection of 35,000 objects spanning from the 6th century B.C to the 21st century that include the crown jewels, sculptures, old paintings, and Egyptian antiquities. Later on, the collection was expanded by Napoleon Bonaparte and the emperors who ruled in 18th century France. The museum displays more than 7500 popular paintings from famous artists, including Leonardo da Vinci, Michelangelo, and Raphael. Da Vinci’s famous portrait of Mona Lisa hangs in one of the rooms in this museum.

Probably the oldest museum on this list, the Vatican Museums treasures 70,000 works of art out of which only 20,000 are on display at present. Some of the most famous works are preserved in this museum, like the classical sculptures by Museo Pio-Clementino, the splendid Raphael Rooms (where the entire room was painted by Raphael), the picture gallery of Pinacoteca, and Michelangelo’s famous Sistine Chapel.

The Indian Museum or the Imperial Museum at Calcutta is the ninth oldest museum of the world and the oldest and largest museum in India. This museum was established during the colonial era and houses some of the rarest collections of antiques, armour and ornaments, fossils, skeletons, and mummies, along with Mughal paintings. With more than 100,000 collectables distributed over six major sections- Art, Archaeology, Anthropology, Geology, Zoology, and Economic Botany, the museum is India’s largest cultural institution.

A relatively newer museum on this list, the national museum of China is already at its peak of popularity by becoming the second most visited museum in the world after Le Louvre. The museum was established by merging two separate museums that had occupied the same building since 1959. The Museum of the Chinese Revolution in the northern wing and the National Museum of Chinese History in the southern wing. Covering Chinese history from the Yuanmou Man of 1.7 million years ago, the museum has a collection of 1,050,000 items which include several precious and rare artefacts.

Covering a large area of Ueno Park in Tokyo, the national museum of Tokyo is one of the oldest and largest museums in Japan. The museum collects, preserves, and displays a comprehensive collection of cultural objects and artworks from Asia, medieval Japanese art and Asian art along the historic Silk Road. The museum has a collection of more than 110,000 artefacts. Its simple structure and beautiful architecture attract around 2 million visitors from different parts of the world annually.

The American Museum of Natural History is one of the largest natural history museums in the world. The museum is a major centre of research and education on the natural sciences and researches in anthropology, astronomy, entomology (study of insects), herpetology (study of amphibians and reptiles), ichthyology (study of fish), invertebrates, mammalogy, mineralogy, ornithology (study of birds), and vertebrate palaeontology. The place has over 30 million research specimens, a huge collection of fossils and insects, and houses the largest collection of life-sized dinosaur fossils of all ages.

Can a museum be so popular that its name itself becomes a widely used expression(“Guggenheim effect”)? You can find these architectural marvels resting in five beautiful cities – New York, Bilbao, Venice, Abu Dhabi, and Berlin. The Guggenheim museum at New York was established by Solomon R. Guggenheim Foundation in 1939 and was later redesigned by legendary architect Frank Lloyd Wright. A landmark work of the 20th-century, this iconic museum serves as a viral cultural center and an educational institution. Out of all the five museums, the most eye-catching one is in Bilbao, Spain. The exterior of the building is made of giant swerving titanium sheets that catch the sunlight and the interior is designed around a large, light-filled atrium with a scenic view of the surrounding hills of the Basque country. Hosting over a hundred exhibitions and more than ten million visitors, the architecture of this museum itself changed the way people think about museums.

Be it the world’s largest museum or the oldest, these museums tell us a story of our own past and how far we’ve come as a species. It is only by acknowledging these histories that we can build a beautiful future.

Have you ever visited any museum? What did you like the most there? Share your experience in the comments below.

You can visit the official websites of these museums and get a 360°view of these beautiful museums. Here are the link: