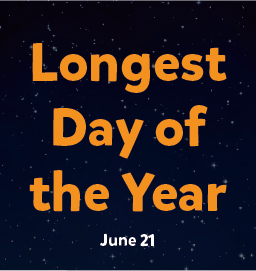 Know all about the longest day of the year

What happens during the summer solstice?

It takes the Earth 365 days to complete a trip around the sun. While the earth is revolving around the sun, it’s also continuously spinning on its own axis. An axis is an imaginary line running from the North Pole to the South Pole around which the earth rotates. One rotation takes 24 hours and is divided into day and night.

Six months later, the tilt gradually moves away from the sun. This happens around December 21 to 23 when the northern hemisphere is facing away from the sun.This event is called the winter solstice or the longest night of the year. This is the summer solstice for the southern hemisphere (the part of the earth that is south of the equator) which comprises countries like Australia, Argentina, Chile, New Zealand and South Africa.