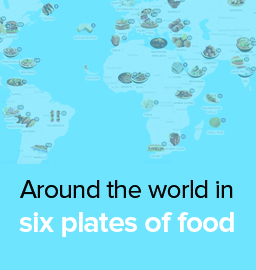 Maps- they are like our guiding stars. They provide information about specific locations, guide us to our destination, and in today’s digital era, they also give us timely updates about famous food joints and what’s cooking. We all have taken the help of a map – either while directing someone to a particular location or seeking out interesting places to eat while travelling. What if we were to imagine a ‘food map’ of the world? What would that look like?

When we think of countries like Japan, Italy, India, or China we think of these following cuisines:

But there are plenty of countries around the world that leave us guessing as to what delicious cuisines they have to offer. Today, with the help of these maps, let’s take a mini world tour – to explore a few native dishes, their history, and how they play an integral part in shaping their country’s culture.

A traditional spicy side dish, Kimchi is an important part of every Korean meal. It is a mix of fermented vegetables like napa cabbage, radish and cucumber, seasoned with a paste of chilli, garlic, and fish sauce. Considered to possess medicinal values, kimchi has been an essential part of Korean cuisine since the 7th Century. With over 200 different styles of kimchi preparations, its overall texture and taste can be described as tangy, sweet, crunchy, and very spicy.

Fun Fact: The average Korean consumes about 18 kg of kimchi each year!

One of the most popular dishes worldwide, pizza was first made in Naples, Italy, in the 18th or early 19th century. Derived from the Latin word ‘pinsa’, meaning flatbread, today, pizza sees a wide range of mix and match toppings.

Fun Fact:  A widespread belief says that in June 1889 the chef at Pizzeria Brandi, Raffaele Esposito, invented a dish called ‘Pizza Margherita’ in honour of the Queen of Italy, Margherita of Savoy. The toppings for a Margherita pizza are tomato (red), mozzarella (white) and basil (green), representing the same colours of the national flag of Italy.

A melting pot of flavours and aromas, fondue comes from the French word ‘fondre’, meaning ‘to melt’. This dish of melted cheese became popular during the 18th Century when Swiss farmers could afford only cheese and stale bread as their winter meals. The stale hard bread would melt when dipped in hot cheese and become easy to chew. After World War II the Swiss Cheese Union promoted fondue as the national dish of Switzerland, thus making it a popular winter meal.

Fun Fact: There is a particular way of enjoying fondue. You need to skewer a chunk of bread into the bubbling cheese and swirl it to coat the bread with a considerable amount of cheese. While swirling, if your bread falls into the cheese pot, you will be assigned a task as a punishment.

If you are up for a warm bowl of veggies, noodles, and meat, Germany is your next stop. A pot roast dish usually prepared with meat which is marinated in a sour sauce made of vinegar, this national dish of Germany goes well with red cabbage, potato dumplings, flour noodles, and boiled potatoes.

Fun Fact: Legends say that Julius Caesar was the main inspiration behind Sauerbraten. Some sources also believe that Charlemagne or Charles the Great invented this dish in the 9th century AD.

When it comes to Mexico, most of us are familiar with tacos, delicious tortilla wraps, and spicy quesadillas. But Mexicans love their sauce way too much! Mole (Pronounced as Mo LAY), their national dish, is a tantalizing sauce made from sautéed onions and garlic combined with exotic spices and herbs and simmered with dark chocolate. Although there are variations to its ingredients, as a rule of thumb, all the variations contain some combination of nuts, fruits, and chilli.

Fun Fact: Mole is so widely consumed in Mexico, that about 90% of the population residing in San Pedro Atocpan city in Mexico make their living from its production.

Imagine a dish of mixed lentils, macaroni, vermicelli, and rice. The idea sounds strange, doesn’t it? However, this is one of Egypt’s most loved street foods. A perfect blend of Italian, Middle Eastern and Indian culinary elements, the dish originated during the mid-19th century. Although it draws inspiration from several countries, the Egyptians give it their twist by adding garbanzo beans, white vinegar and chickpeas all layered together with a spicy tomato sauce and caramelised onions.

Hope you had a tongue tantalizing experience reading about these six dishes from various cuisines around the world. Truly, these dishes say a lot about the culture and history of their respective homelands.

Are you a foodie? What is your favourite cuisine? Do let us know in the comments below.