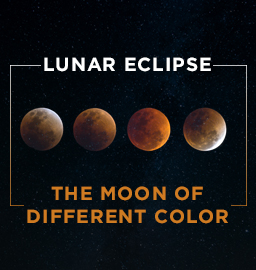 Lunar Eclipse : The Moon of a different color

Eclipses have always fascinated human beings. One of my favorite mythological take on the eclipse is the Hindu god Rahu .He’s not the oldest eclipse deity, but his stories are wondrously gruesome. He was once a proud Asura, a demigod of immense power and hunger. Seeking immortality, Rahu drank the divine nectar known as Amrita. Before the drought could pass his throat, the all-powerful Vishnu decapitated him for his transgression.And hence the fallen god continually seeks his revenge on the two planetary deities who ratted him out to Big Vish: the sun and moon and these are known as solar and lunar eclipses. While myths are extremely interesting, let’s understand science of eclipse, it’s impact on Human Health and more on the longest eclipse of 21st century that is happening this month.

This would be the second total lunar eclipse of 2018 which will be visible in large parts of Australia, Asia, Africa, Europe, and South America. It’s totality will last for 103 minutes, making it the longest eclipse of the 21st century.

Total lunar eclipses are also called Blood Moon because of the reddish-orange glow the Moon takes on during the eclipse.A total lunar eclipse takes place when the Earth comes between the Sun and the Moon and covers the Moon with its shadow. When this happens, the Moon turns red, earning the nickname of Blood Moon.

Total eclipses of the Moon happens on a Full Moon day when the Sun, Earth, and Moon are aligned to form a line. The astronomical term for this type of alignment is syzygy, which comes from the Greek word for being paired together.

The plane of the Moon’s orbital path around Earth is inclined at an angle of 5° to Earth’s orbital plane around the Sun, which known as the ecliptic. The meeting point of the two orbital planes are called lunar nodes. Hence,  Lunar eclipse occurs when a Full Moon happens near a lunar node only.

On the day of the eclipse, the Full Moon is at its farthest from the Earth, so it looks a little smaller, making this a Blood Moon eclipse.

Interestingly, a solar eclipse always occurs about two weeks before or after a lunar eclipse.

Usually, there are two eclipses in a row, but other times, there are three during the same eclipse season. 13th July is the solar eclipse day this season. Though it will not be visible in Bangalore but Southern part of Australia, Indian and Pacific ocean etc. This being the first Eclipse of the season, and upcoming eclipse on 11th Aug being the third.