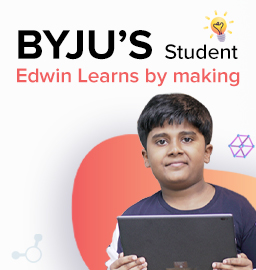 Meet Edwin – The Young Scientist Who Makes His Own Inventions

“When I grow up I want to be a scientist because my mother taught me that everything you see around you, including a bulb, was invented by a scientist.”

That’s Edwin Jacob Darwin, a young scientist in the making from Kerala.

A curious sixth-grader, Edwin is a self-explorer who learns hands-on the practical side of everything taught in school. His love for science comes alive with his ingenious working models that show how scientific concepts work in real life. For example, if the recent physics class was all about circuits, you are sure to find Edwin hunched over his study table, building a bulb holder with a switch to see how exactly does electricity bring a bulb to life!

His strong visual memory craves seeing concepts in action which help him understand better. That is how BYJU’S – The Learning App became Edwin’s beloved learning companion. The detailed visual explanations for every topic help Edwin quench his thirst for knowledge, while also giving him the freedom to study any topic at any pace – something that he loves.

However, Edwin’s ever-curious mind found that there was an invention that he could make for his learning companion too. While he loved studying from the BYJU’S – The Learning App, he found that he didn’t like holding the tablet as much. So what does a young scientist like him do? He takes two blocks of wood, carves them, and makes a stand for the tablet!