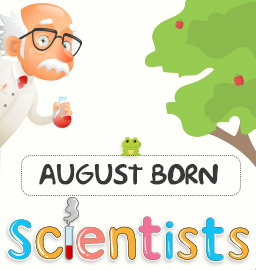 Science is constantly evolving, helping us understand our world better. Over the centuries, we have been able to understand the world around us a little better, thanks to some brilliant scientists. Some have made our lives easier by inventing machines, creating live saving medicines, whereas some have helped eradicate pain and poverty.

Here are a few famous scientists who celebrated their birthday in August, who are an inspiration to all of us to never stop dreaming and work hard.

Known as “Father of Chemical Science”, he was a chemist, educationalist, industrialist and a philanthropist. Founder of India’s first pharmaceutical company, Ray made several contributions to the field of organic and inorganic chemistry. He discovered the stable compound Mercurous Nitrite in 1896 and established India’s first research school in Chemistry

Honours – Faraday Gold Medal of the University of Edinburgh, Companion of the Order of the Indian Empire.

Known as the “Father of Indian Green Revolution”, M.S. Swaminathan followed his vision of removing poverty and hunger from the world. During the Green Revolution, he initiated several programs under which high-yield varieties of wheat and rice seedlings were planted in the fields of poor farmers. He is a geneticist and international administrator and was placed among the Top 20 Most Influential Asians by the “Times Magazine”.

Honours – Director General of Indian Council of Agricultural Research, Principal Secretary at Ministry of Agriculture, Ramon Magsaysay Award for Community Leadership in 1971, the Albert Einstein World Science Award in 1986, the UNESCO Mahatma Gandhi Prize in 2000, and the Lal Bahadur Sastri National Award in 2007.

Known as the “Father of India’s Space Program”, Vikram Sarabhai intiated space research in India and was one of the first people to help develop nuclear power. He founded the Physical Research Laboratory in 1947 starting with Cosmic Rays. He played a major role in setting up Indian Institute of Management, Ahmadabad and was also the Vice President of the fourth UN conference of “Peaceful Uses of Atomic Energy”. He succeeded Homi Bhabha to become the chairman of the Atomic Energy Commission of India.

French physicist and inventor who invented the first colour photographic plate, Lippmann’s major inventions revolved around Lippmann Colour, Photography, Integral 3-D Photography and the Lippmann Electrometer. He found a way of reproducing colours by photography based on interference phenomenon and was the inventor of Coelostat.