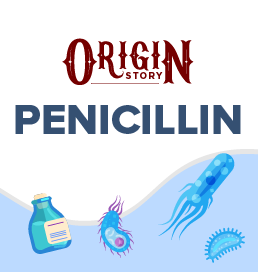 We sometimes tend to forget how lucky we are to have the advantages of modern medicine. In today’s day and age, we have found cures for innumerable diseases that could have otherwise been deadly. But it was not always like this. Just a hundred years ago, catching an infection from a small scratch or a cut could mean a matter of life and death! Today, human life expectancy is higher than ever and the credit definitely goes to scientific advancements in the field of medicine. But what if we told you that this crusade against germs and diseases was sparked off by one man’s unexpectedly happy accident in his laboratory?

This is the Origin Story of penicillin – the first antibiotic to have ever been discovered and how it changed the course of human health forever.

Antiseptics are just not good enough!

In the 1920s, a young Scottish microbiologist by the name of Alexander Fleming was busy studying various kinds of bacteria. Having lived through the suffering and disease brought about by World War I (1914-1918), Fleming was interested in finding a way to prevent the deaths of soldiers on the battlefield due to infections. At the time, wounds were treated with antiseptics. Fleming noticed that while antiseptics were good for surface level cuts and wounds, they would not work deeper in the body and were useless against severe bacterial infections.

Three years after the war had ended, Fleming had a breakthrough. By collecting samples of mucus from patients’ noses, he discovered that the mucus had the effect of slowing down bacterial growth. Fleming had discovered what we know today as lysozyme, an enzyme present in many secretions including tears, saliva, skin, hair and nails as well as mucus. But lysozyme could only defend against mostly harmless bacteria and Fleming soon realised that it wouldn’t have any great therapeutic effects.

By 1927, Fleming was studying the properties of a kind of bacterium called staphylococcus. He had already gained a reputation as a brilliant but somewhat careless and absent-minded researcher! But little did he know that his carelessness would one day change the world!

On September 3, 1928, Fleming returned to his laboratory after a holiday with his family. But before leaving for his holiday, our dear absent-minded professor had left a few samples of staphylococci culture on plates and forgotten them on a bench in a corner of his laboratory!

On returning, Fleming noticed that one culture was contaminated with a strange, fluffy fungus.  Strangely, he noticed that the staphylococci bacteria immediately surrounding the fungus had been destroyed, whereas other samples of the bacteria farther away from the fungus were normal. “That’s funny,” Fleming famously remarked at the time, not realizing the far-reaching implications of this seemingly humorous discovery!

Fleming described the fungus as a “fluffy white mass which rapidly increases in size and after a few days sporulates and changes colour from dark green to black to bright yellow.” He correctly identified the fungus as belonging to the genus Penicillium. He named the substance released by the fungus ‘Penicillin’ and thus the first-ever antibiotic was born!

Necessity is the Mother of Invention!

Although Alexander Fleming invented Penicillin, it wasn’t him who made it widely popular. When he published the findings of his discovery, not much attention was paid to it. He also noticed a lot of issues with penicillin – it was hard to isolate a sample of it and growing it large quantities was a problem. He also thought that penicillin was slow-acting and would not be ideal for treating bacterial infections in humans. Eventually, Fleming abandoned his research.

In 1939, World War II started. Once again, there was a need to protect soldiers on the battlefield from infections. Inspired by Fleming’s work, the United States along with Great Britain funded two researchers at the Radcliffe Infirmary in Oxford  – Howard Florey and Ernst Boris Chain – to mass-produce penicillin. The project was a huge success and a game-changer during the war. This new antibiotic allowed soldiers to be patched up and be ready to fight in a matter of weeks. Such a thing was never heard of before! by the time World War II ended, U.S. companies were making 650 billion units a month, enough to treat every single one of their soldiers and more!

To this day, penicillin remains one of the most widely used antibiotics. It also paved the way for the creation of thousands of new antibiotics. The advent of antibiotics has enabled us to create cures and vaccines for diseases caused by bacteria that were earlier thought to be fatal. Diseases like pneumonia, tuberculosis, strep throat, ear infections, urinary tract infections and a host of other common bacterial infections can be tackled by antibiotics. You might have heard of some commonly used antibiotics like erythromycin, amoxicillin, levofloxacin etc. The world would not have any of these if not for Fleming’s absent-minded accident!

Liked what you read? Check out more such Origin Stories at The Learning Tree Blog.