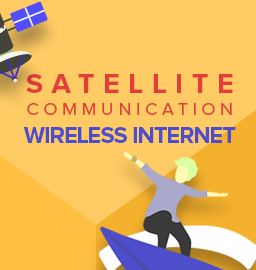 In our previous article about “Undersea Cables ” we learnt about the Submarine Communication Cables and how it is the Internet’s Backbone. In this article, we will explore the role of satellite and how wireless internet works.

There are two basic types of wireless internet access: wifi and cellular. Wifi networks are relatively simple. Anyone can purchase wifi networking equipment in order to provide internet access in a home or business.

Cellular networks are more centralized. They work by breaking up the service territory into cells. In the densest areas, cells can be as small as a single city block; in rural areas a cell can be miles across. Each cell has a tower at its center providing services to devices there. When a device moves from one cell to another, the network automatically hands off the device from one tower to another, allowing the user to continue communicating without interruption.

The cable has a shield which minimizes electrical and radio frequency interference known as the Coaxial cabling. It is a primary type of cabling used by the cable television industry and is also widely used for computer networks, such as Ethernet. This cable was used as a transmission line for radio frequency signals. Its applications include feedlines connecting radio transmitters and receivers to their antennas, computer network (Internet) connections, digital audio (S/PDIF), and distributing cable television signals.

Talking about the signals let me tell you about the Satellite Internet access which refers to Internet connectivity provided through satellites. And this kind of connection is way too expensive to work upon. You must have heard about the recent Space X launched by Elon Musk. In other words, it is also  a telecommunication network provided by orbital communication stations. Signals from these satellites allow a user with a dish to have a high speed internet connection.

Satellite internet equipment is made up of three main components:

The advantage of satellite-based broadband is that it can cover entire regions without the need to build out expensive land-based internet infrastructure—one just needs a satellite dish to use it, which makes it good for serving rural areas. And while it started out pretty slow, it’s got a lot faster over the years.

Astounding isn’t it? But there are high chances of experiencing the advanced and multiple other wireless internet connections in future. A tech-miracle which has connected us across the globe making our lives simple and uncluttered between cables.