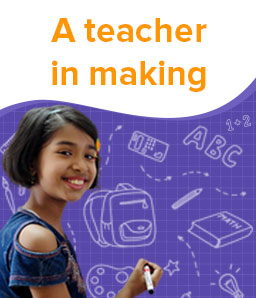 Shreya Sinha from Ghaziabad does not have conventional dreams and ambitions. Unlike other eleven-year-olds who dream of becoming doctors, astronauts, or scientists, Shreya dreams of becoming a teacher when she grows up. In the pursuit of this dream, she is already working on her presentation skills by making videos on different subjects and uploading them on her very own  Youtube channel. She teaches with such clarity and order that it makes one forget just how really young she is.

Whether it is her YouTube classes or winning Olympiads or her favourite movie, her everyday pursuits and interests all revolve around this dream of hers. “My favourite movie is Super 30 because of its story. Mr. Anand Kumar is so selfless and high on morals,” says Shreya. What inspires this hardworking kid are qualities like humility, clear vision and selflessness. Talking to Shreya feels like taking a breath of fresh air. Everything about her is strikingly different from the mainstream.

The Sinha family is a family of four, comprising Shreya, her younger sister Jasmine and her parents. Far from the expectation of everyday sibling rivalry, Shreya is a doting elder sister. “She is generally very kind and caring towards Jasmine, sometimes she even tries to teach her,” says Mrs Anita, Shreya’s mother. With the dreams of making both her daughters into independent and strong women when they grow-up, Mrs Anita is a mother on a mission. Her belief in Shreya is what keeps her going. “I  want to give my children an education that targets learning and incites curiosity. In a way, BYJU’S is exactly what I’ve been looking for” she adds.

Within just a few months of using BYJU’S, she can see Shreya improve in subjects like Maths, Science, and even English. “Her English speaking skills have improved ever since we joined BYJU’S. We can see the difference when she records her lessons,” she adds. Another plus point of having BYJU’S  is the all-time support in the form of a mentor. “I really like Ms Shrishti, my mentor. She is very kind and explains everything very clearly,” elaborates Shreya.

Shreya’s mother believes in her dream of becoming a teacher. “She is very diligent. Whatever she puts her efforts into, she always achieves it. With the right education, I am sure she will become a great teacher someday,” says Mrs Anita.

While Shreya’s mother is the strict parent, her father, a mechanical engineer by profession, brings balance to the equation with his sense of humour. “He is very hilarious. His jokes make me laugh all the time,” quips Shreya. The family spends time together by sometimes engaging in a little bit of singing and dancing together.

Shreya believes that being selfless is an important trait of a good human being. “It really inspires me,” she adds. Teaching as a profession requires you to be selfless and so it is rightfully termed as noble. She says she would like to help people in need of education, just like her inspiration Mr Anand Kumar.

We at BYJU’S are sure of Shreya’s abilities and her dreams.  She is definitely going places with a determination like that.

If you enjoyed reading this you may also like: