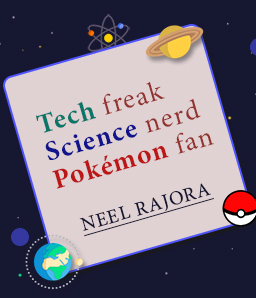 A Tech freak and a class Topper – Neel Rajora and his Secret Success Story!

Technology has made its inroads into our everyday lives today. Be it at home or work, we have embraced tech in every possible way as it ensures a smooth and easy access to everything. Similarly, use of technology in education has helped millions of student get access to quality education irrespective of their proficiency levels and geographical locations. In fact, the new generation is more inclined towards tech-enabled education as it makes learning easy and fun.

Meet Neel Rajora – a firm believer of the fact that technology makes learning an engaging and effective experience. A student of Manav Mangal School, Delhi; this 5th grader largely depends on BYJU’S – The Learning App for his studies and has scored 97% in his recent final exams.

Watch what Neel’s father has to say about fun with learning through BYJU’S – The Learning App.

A big fan of Pokémon and video games, Neel spends his free time playing with his dad or painting the entire Pokémon family.

“My favourite character is Pikachu. We (his father and him) often take up character roles while studying, where my dad is Ash Ketchum and teaches me Science and G.K. I just love to study in this way,” giggles Neel.

Neel’s consistent good scores and his interest in the world of Science caught the attention of Team StoryWeavers. When we asked Neel his secrets, he answered with a smile. “I follow a simple method of studying – I revise my class lessons every day after school. This helps me stay prepared for any test, any day!”

Education being an integral part of the Rajora household, Neel’s parents ensures that he develops the right approach towards it. Be it casual learning or preparing for any exams, keeping the basic concepts clear has always been a priority. Hence, they filled Neel’s life with encyclopaedias, G.K books and scholastics from an early age.

“Neel is curious about discovering scientific things and solving problems. Hence, he shows a keen interest towards Science and Math. This inquisitiveness has always helped him devote maximum time in studies,” says his mother.

As for his study pattern, Neel sincerely follows the timetable set by his father.

“My weekly timetable is set in a way where I get to revise all my subjects’ at least twice a week. It helps me in two ways – 1. The concepts remain fresh in my mind all the time and 2. If I get any doubts, I get it cleared immediately with BYJU’S Learning App.”

11 year old Neel enjoys anything that is catchy. When his dad gifted him BYJU’S – The Learning App, the fun videos and Math related games caught his attention. The animations in the videos and the puzzle after each concept were so engrossing that he gradually fell in love with the application and started using it every day.

Earlier I was struggling to understand the concepts of fractions and multiples at school. I often faced difficulties in solving questions from those chapters. BYJU’S – The Learning App helped me understand it better by breaking each concept into mini topics. Now,  I study from the app first and then refer to my school books.

His dad Sailendra Rajora adds in, “The BYJU’S App is bringing about a massive change in the ways children learn. I have always had three main requirements when it comes to my son’s studies –

BYJU’S – The Learning App fulfils all these requirements. Now he doesn’t require much assistance in studies as the app provides all the explanations on the fingertips.”

We wish Neel a good luck for all his future endeavours. Special thanks to Neel’s favorite mentor Rupa for closely guiding him achieve his future goals.