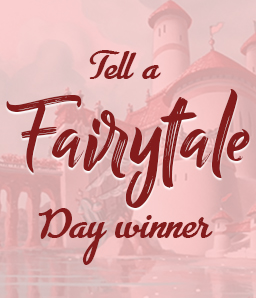 Team Storyweavers received some amazing entries for the ” Tell A Fairytale Day Contest”, but Nihaarika Roshan Raj’s story stood out as the most creative and gripping story. Here is the tale she sent in to us. We hope you enjoy it as much as we did!

Once, in magic town, there lived a young witch named Lucinda. She was a wonderful witch, who had discovered and solved every mystery known in the town. There was also another young witch named Rachel who was Lucinda ‘s best witch- friend. They were excited, as Tinkerbelle, the fairy, was going to visit again to tell them their next adventure.

The next day Lucinda and Rachel got off their  beds and flew to the oak tree on their brooms.  They pressed their hands on the oak tree and  recited the spell, ‘Oak tree call Tinkerbelle!’.

Suddenly a flare of light, turned the whole tree  white and purple. It dragged them in and, Lo!  They were in Fairytale land, where all the  princesses were getting ready for balls, fairies  dancing and angels singing. Tinkerbelle came fluttering her wings and pixie dust sparkling on her blushed cheeks. She was looking worried and the witches were anxious about it.

‘What is the matter Tinkerbelle?’ asked Lucinda.’  You look worried.’ Joined Rachel. ‘I have something  to talk about girls.’ Said Tinkerbelle. They flew towards Tinkerbelle’s workplace and sat  down on a rough chair. Tinkerbelle served them  some tea and cream buns and sat down to talk. She talked all about evil witch, Petunia and how she  stole the fairyland creator, The Blue Sapphire. They  had to go to crystal castle to get to the sapphire.They picked their brooms and Tinkerbelle mumbled  a spell and mist covered the place. After a few  seconds Lucinda and Rachel were standing in front  of the oak tree.

They two gave grins to each other and flew across the forest. It wasn’t a very long journey, but it took time.They reached a huge white castle. When they had entered the castle, they thought that it was a bad idea to split up amongst themselves. The corridors were endless. There were thousands of rooms and too many trap doors and passage ways. Lucinda spotted a passage way where it wasn’t so dark as the other passage ways. She peeped through it and saw a bright blue light shining through it. She called out for Rachel, ‘ Rachel! Look, I can see some light through this passage way. May be the sapphire is here.’ They hold each other’s arms closed their eyes and jumped into the passage way. They slid round and round and suddenly fell down with a thud. There, they saw a bright blue shining sapphire on a velvet coloured crystal. They slowly tip-toed to the sapphire and opened their mouths as soon as they reached close to it. It was dark and the sapphire was the only light in the hall. Lucinda lifted up her hand and was about to pick the sapphire, a cold laugh rang in her ears.’ Ha! Ha! Ha!’. ‘It is Petunia, I am sure she is. She has come here to stop us!’ said Rachel.

Lucinda’s heart went beating. A crack started spreading on the floor. Petunia suddenly came into sight. She had pink hair and dark eyes. She was wearing a black and pink gown.‘ Ha, Ha! Coming to take away the sapphire? Well, not this time, I have enough power to stop you. By today’s blue moon, all the power of the sapphire will be mine, only mine!.

She mumbled some words and, Lo! Lucinda and Rachel were trapped in one of the rooms. There they saw a girl sitting close to her bed, peeping out of the window. ‘Well, well, you got trapped here too’, said the girl, when she saw those two. ‘ I am Patricia, Petunia’s sister. Don’t worry, I am not evil like her. What are your names?’

‘I am Lucinda and she is my friend Rachel. Tinkerbelle has send us to bring the Blue sapphire back.’ Said Lucinda,’ How did you get trapped? ’ ‘Well, I tried to stop Petunia and she got angry and trapped me here so that I cannot try to stop her again. She even took away my powers.’ Said Patricia. ‘Patricia, we are witches and we have powers, maybe we can unlock the door and get back your powers and also defeat Petunia.’ Said Rachel.
‘ That is a great idea Rachel! ’ said Lucinda. ‘ You are witches ! I am dreaming.’ Said Patricia shocked. ‘ Let’s not talk about that! Come on! Let’s unlock the door!’ said Rachel. ‘Unlock n us prisons!’ they recited the spell and the door suddenly opened. They ran up to the hall and saw Petunia sitting on a stool starring the hour glass. ‘ Just few more minutes and it will be the blue moon and my victory!’ she screamed in her cold voice. ‘Not so soon sister!’ cried Patricia. ‘ Oh, so you two escaped! You can’t defeat me now. It’s almost time for the blue moon. As she was boasting about her victory, Rachel slipped behind her and picked the blue sapphire. She accidently dropped her broom on the velvet crystal and it cracked. Petunia turned and saw the Blue Sapphire was gone and the crystal cracking. ‘Oh no! This can’t be happening! It’s not even blue moon!’ Petunia cried. Her hair turned white and her face pale and wrinkled. Mist covered the place and cold voice called out ‘ I will take revenge, I will!’. And she vanished.‘ She’s gone ! Hurrah! She’s gone!’ Rachel cried. They happily went back and also thanked Patricia for help. They got on to their brooms.

Lucinda turned and said, ‘Bye, Patricia and, Thank you!’. Patricia waved back and the two merry witches disappeared in to the sky.