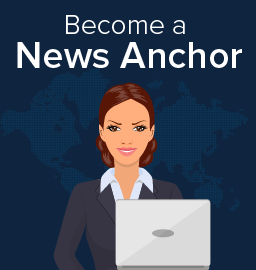 What does it mean to be a News Anchor?

A news anchor’s job can broadly be described as someone who informs the public about the important news from around the world, takes a live or taped report from field reporters, interviews guests on the show and manages the overall viewer experience until the end of the broadcast.

So if you are someone who is passionate about storytelling and would like to tell the nation what it wants to know, then this is the career for you.

And what skills does it take to become a News Anchor?

Unlike many other professions, there’s no one-size-fits-all approach to be a News Anchor. However, it would be fair to say that the following skills are a must:

Being camera-friendly as news broadcasting is all about facing the camera.

Exceptional Communication Skills, both in terms of verbal and written communication, great body language and a clear, confident voice.

Great Interpersonal Skills, to establish various sources of information, and to build rapport during interviews to put guests at ease.

Good Sense of Grooming and Attire, that adds on to the charisma and likability of the anchor. Appearance matters on a visual medium like TV.

Adept at judging trending news, which involves recognizing important headlines and secondary news stories. It includes being updated and informed in their field of expertise, at all times.

The ability to ‘think on your feet’, as reporting and responding to live news and other such scenarios demand quick thinking.

But isn’t much of the News Anchor’s job just about reading the lines from the teleprompter?

This is similar to stating why train pilots to fly and navigate the aircraft when the plane is capable of running on auto-pilot mode? Simply put, the News Anchor’s job is to communicate information to the audience in a way that is understandable to them. Many times this involves having to do a live telecast, which is a very high-pressure job. Just like the pilots in the aircraft who have to take over in case of any unforeseen situation, news anchors are also responsible to navigate the whole show in case of any unplanned event or an emergency situation.

What educational qualifications does a News Anchor need?

Unlike other fields, this profession values talent more than a specific degree. Generally speaking, a job as a News Anchor requires a bachelor’s degree in either journalism or mass communication. But as mentioned, other majors are also acceptable. When it comes to masters, although not compulsory, popular news reporters pursue subjects like economics, political science, data information and business, amongst others to establish their expertise.

To illustrate the same, let’s take a look at the educational qualifications of some of India’s top News Anchors:

In the era of social media, a news anchor’s role has evolved much more from just reporting current events. Most of the popular news anchors today are subject matter experts. Their shows are strongly influenced by their knowledge and persona. News shows being coloured by their anchor’s personality is a recent trend. This can be credited to the popularity of news shows like Amanpour on PBS by Christiane Amanpour, AC360 by Anderson Cooper and some comedy shows heavily charged with political satire like The Daily Show with Jon Stewart, Last Week Tonight With John Oliver and The Patriot Act by Hasan Minhaj.

What courses and colleges can you apply to?

You can pursue BJMC (Bachelors of Journalism and Mass Communication) a three- year undergraduate course. But as mentioned earlier, journalism is open to people from various fields. So you can also pursue other undergraduate courses too like B.Com, B.A. etc. For example, Harsha Bhogle, a well-known journalist and sports commentator, is a chemical engineer and has an MBA from IIM- Ahmedabad.

Can you start now?

News Anchoring is all about knowledge and the confidence to communicate it well to others. Hence reading newspapers and books is a must. You can read books on subjects like economics, politics, history, etc., both at the national and international levels. For example, reading books written by Noam Chomsky, Amartya Sen, Micheal Parenti, and Daniel Kahneman can be a good place to start. Also, participating in school debates and taking up anchoring, or emcee roles in annual day functions can go a long way. Some schools and colleges have their newsletters or newspapers. If that’s your school or college, then gain experience in reporting, writing, and editing for the same. You can also look for paid or unpaid internships in media companies.

Your first step towards becoming a News Anchor is performing well in your 12th Board Exams. BYJU’S – The Learning App has programs designed to prepare you for your boards as well as competitive exams like CAT. With adaptive and engaging videos, sample test papers for each concept, and personalised feedback, BYJU’S will give you the necessary boost to do your best.

Give wings to your dreams with BYJU’S The Learning App!

Now, you can get a free counselling session with BYJU’S experts at your home to help guide you better.

Like this article? Want to read more articles like this? Check out some of our other Careerscope options below:

What does a software engineer do?

Here’s How You Can Become An Aerospace Engineer