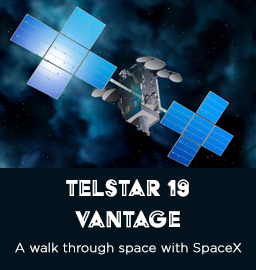 Telstar 19 Vantage – A walk through Space

Elon Musk has been making all our space adventures a reality. If you’re a space enthusiast then you are on the right page.

In fact, in the last 16 years, SpaceX has launched two main sets of rocket families namely – Falcon 9 and Dragon. Falcon 9 rocket is a multi-use, two-stage rocket powered by nine Merlin engines on the first stage, and a single Merlin engine on the second stage. These engines run on cryogenic liquid oxygen and a fuel called RP-1, which is a highly refined kerosene.

So, let’s catch up on SpaceX’s latest launches.

Telstar 19V (Telstar 19 Vantage) is the latest satellite mission launched by SpaceX.   It is a communication satellite in the Telstar series of the Canadian satellite communications company Telesat. It is the first of two missions launched by SpaceX on July 22 2018, using a Falcon 9 rocket and will serve growing consumer enterprise and mobility markets across the America and Atlantic. Currently, it is being operated by Telesat Brasil, a Brazilian satellite company wholly-owned by Telesat.The Block 5 Falcon 9 was lifted off from Cape Canaveral Air Force Base in Florida and deployed Telstar 19 Vantage into a geostationary transfer orbit.

Some Interesting Facts about Telstar 19V

Along with operating geostationary satellites, Telesat also planned to prepare a constellation of 117 low-Earth-orbit spacecraft for high-speed broadband in 2022.

Telstar 19V is one of the most exciting and interesting projects which is helping SpaceX shape the future of space exploration. Do let us know if you would want to know more about SpaceX’s projects like like sending a car into space etc. Share your thoughts in the comments section.