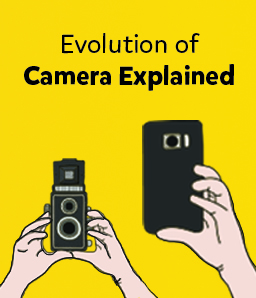 Trace the epic journey of the camera from pinboxes to smartphones

I am an important part of everyone’s life. Be it holidays or festivals, I help people make beautiful memories at the touch of a button. Say cheese, and I will make you smile. Wondering who I am? I’m the camera. In this month’s The Evolution of Everything, let’s hear my story – Where was I born? Who created me? And how did I transform from a box into a device?

Are you ready to listen to my story?

The journey began somewhere in the 5th Century BC. Several renowned philosophers and mathematicians like Aristotle and Ibn al-Haytham theorized on the phenomenon of optics to understand light. Arab mathematician Ibn al-Haytham invented the first pinhole camera called Camera Obscura. This camera was designed in the shape of a box with a small hole in the centre. The light would travel through the hole and strike a reflex surface. This would then project a colourful image, upside down.

French inventor Joseph Nicéphore Niépce created the first permanent images using a portable Camera Obscura. They were the first recorded images that did not fade quickly. Soon, he collaborated with French photographer Louis Daguerre to design the daguerreotype camera. This camera could be used by the masses.

Fun Fact: The daguerreotype camera was one of the world’s most expensive cameras.

German photographer Friedrich Von Martens invented the first panoramic camera – Megaskop Kamera in 1845. The lenses of this camera could rotate 110 degrees to 360 degrees. This helped in getting quality landscape images.

Fun Fact: Friedrich Von Martens’ remarkable invention bagged him the Council Medal at the Great Exhibition in London in 1851.

American entrepreneur George Eastman introduced the first celluloid film for use with a camera he called the ‘Kodak’. In 1900, he introduced the iconic camera, ‘The Kodak Brownie’ that was a hit until the late 1960s.

Fun Fact: The first Land camera (named after its inventor) employed a chemical process that made completed photo prints within a minute.

Fun Fact: In 1991, the Kodak DCS SLR camera became the first professional digital camera that was sold for $13,000.

Japan’s J Phone is the first phone to have a camera. With this, phone cameras became a trend and many advanced versions were created afterward. Along with it, advanced SLR and DSLR cameras became popular among aspiring photographers.

The camera is undoubtedly a breakthrough invention in the history of science. It has transformed the way people look at art and life. Do you have a story about the first time you clicked a picture? Do share with us in the comments below.