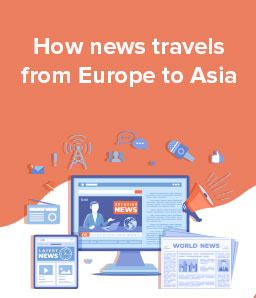 Tracing The Evolution of News Through Time

Do you remember when ISRO launched Chandrayaan 2 last year? Did you get live updates of the launch? Or did you hear about the mission from those around you the next day?

Now imagine if you had to wait for weeks or even months before you knew if the mission was successful. This certainly might have happened if you lived in a different time in history. Today, we can access news more easily than ever before because of the internet. But what if we didn’t have the internet? How would we have kept ourselves updated?
Let’s travel through time to different countries and find out!

News in the Marketplace
Our first stop is the city of Rome in the year 300 AD. Here, the only way to find out the latest news is by meeting different people in the city forum. The Roman forum was a marketplace where people would gather and exchange information. Neighbours and travellers who were passing by would update citizens about significant events. The king may occasionally have posters put up in the forum, but he would only share the news that he thought was important. If you lived in ancient Rome, you would have had to find a like-minded traveller to update you on your favourite topic.

The First Weekly Newspaper
Let’s move slightly up north and fast forward to the 1600s. We are now in Germany before the Industrial Revolution. Here you would have access to the world’s first weekly newspaper – Relation aller Fürnemmen und gedenckwürdigen Historien. This newspaper printed important information from around the world every week. So if you wanted to know about cricket being played in England, you would have had to wait a week for it.

The Rise of Daily News
Now, let’s move west to England in the 1700s. This was where the world’s first daily newspaper, The Courant, was published. The newspaper started by publishing news from foreign countries, and for the first time, one could get daily news updates. Towards the end of the 18th century, the government in Britain relaxed laws around newspapers, making it easier for a larger variety of topics to be written about. You could now read about current events the very next day.

The Start of Broadcast Television
To understand the role of television in the news, we’ll have to cross the Atlantic Ocean to the United States of America during the Second World War. The first television news broadcast started in America during wartime in the 1940s. Now, important information started reaching people on the very same day. The radio also became an important channel for news around this time. Information could now reach you faster, but you would hear about major events only after they happened.

The Internet and Social Media News
To end our journey, let’s travel back home to present-day India. Today, we have the internet and smartphones to help us access news websites with live updates. We can follow any event of our choice with updates in real-time.

Let’s consider where we started from in Ancient Rome, where a like-minded traveller had to update us on our favourite news, to where we are now with access to information at our fingertips. Such easy access to news has never been witnessed before in the history of time.

Here’s how locks changed over the years!

Tracking the evolution of the television

What is the history of the remote control?