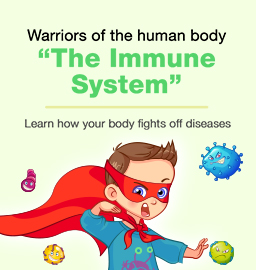 Warriors of the human body- The Immune System

Achoo! That’s all it takes for you to catch the flu from your benchmate.

The suspicious roti you had for lunch could end up giving you the stomach flu.

There  are a billion other things which could be potentially harmful and even fatal to your body. But, it is all being taken care of by the immune system. It is your body’s defense mechanism against illness and disease. They use an arsenal of chemical and physical barriers and also different kinds of cells to defend itself. So, how does the immune system do its job?

Cells in the immune system

It is a normal workday for your body, your brain has done a remarkable job today and solved all the Math questions correctly, the cereal you had for breakfast is getting digested and now your muscles are hard at work to keep you ahead in the race during PT.

Suddenly, you scrape your knee. Your whole body goes into panic mode, preparing for the attack of enemy bacteria who are going to breach the fortress and enter the body in huge numbers.

Your immune system takes the reins and starts a series of complex interactions to face this attack.The first line of defense being breached is your skin. The bacteria enter through it  and start using up the body’s resources.

Your immune system calls in the border guards, the macrophages.The battle begins with macrophages devouring the bacteria by engulfing them within their membranes.

To help them out messenger proteins relay this information to special cells known as the neutrophils. They release bacteria destroying toxins which kill the enemy one by one.

The brain of the immune system decides to step up the game and calls in antibacterial forces from the lymph nodes to face the attack. Here billions of helper and killer T cells  are waiting to be activated.These T cells bond with the enemy to understand how to attack it and modify themselves accordingly.

They dispatch themselves in three groups.

After analyzing the nature of the bacteria they release their own deadly weapons- antibodies.

The antibodies reach the scene of battle in the nick of time. They start destroying the bacteria and it soon becomes clear that victory is ours. The scrape has done no harm other than a minor swelling on your knee.

Meanwhile, you’ve gotten home and cleaned up the wound and told your mom about your day at the playground. It’s been a good day for you and your immune system.

Your day may be over but the battle ensues for your immune system.Remember that sneeze cloud your friend created? Well, you don’t have to worry about it. The mucous lining of your nose is like a barricade of tissues which can protect you against a bout of cold and fever. The suspicious sandwich has already been taken care of by  the digestive juices in your tummy.Phew!

At your beck and call 24/7, watching over 11 different systems and keeping the internal functioning of our body stable , our immune system keep us running every second of the day. It has countless cells, proteins, tissues and organs helping it to function. For those of you who want to know more about it you can watch this video sprinkled with facts and explanations to all your questions about what goes on inside the immune system.

A self love warrior and a believer of ‘hugs make life better’ – Nidhi Tom is a member of team StoryWeavers. Currently, she is in the pursuit of finding the right balance between making nutty travel plans, cozying up in her happy place-the bed and weaving fun and quirky tales. Do write in to storyweavers@byjus.com if you want to share your stories, thoughts or any random rants with her.