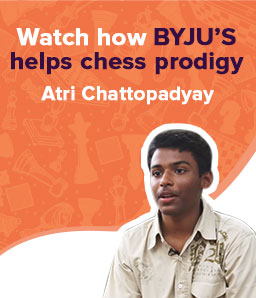 “I want to be a world chess champion in the next 20 years. To get there, I need my teachers to be able to match my time, and nobody does it better than BYJU’S,” says ninth-grader Atri Chattopadyay.

Being one of Kolkata’s promising chess players, Atri has it all set for him. He is hardworking, has supportive parents, and BYJU’S app, a school of knowledge personalized to his pace and style. “It’s great that I can revise my lessons at any point and anywhere that I want to,” Atri says.

“Our son has fallen in love with the BYJU’S app because of the way they clarify his doubts. We recommend the app to every student,” says a delighted Biswanath Chattopadyay, Atri’s father.

Watch Atri talk about chess, studies and much more.