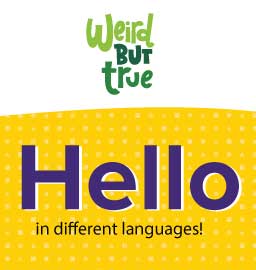 Weird, but True: 7 unusual salutations from around the world

A handshake, a namaste, a brofist, ‘a time nahi hain boss shake,’ a hi5, a hug, a thumb-twist shake, etc. There are so many quirky and fun ways to greet each other, isn’t it? Different ways of greeting express different feelings. For instance, in India, we press our palms together and slightly bow down to welcome someone, we shake hands to wish someone good luck or hug someone to congratulate them.

Did you know that there are different ways of greeting people in different parts of the world? From pressing noses, sticking out one’s tongue, to delicate air kisses on the cheeks, the list goes on. Let’s go around the world and read about some unusual ways of greetings.

Let’s start this list with our neighboring region – Tibet. Tibetans have a unique way of greeting people. Blame it on the funny king, who introduced this tradition, Tibetans greet their tourists by sticking their tongue out. It might come as a shock to an outsider, but there is a legend behind it. It is said that there was an ancient cruel king who was known for his black tongue. To prove that they are not the reincarnation of that king, Tibetans stick their tongues out and greet people.

If sticking out your tongue sounds unusual, try hongi. An intimate traditional gesture by the Māori people of New Zealand, a hongi involves two people pressing their noses and foreheads against each other. A symbolic act of showing unity, in a hongi, the ‘ha’ means breath of life. The tradition of hongi is considered to have directly come from the gods.

The Filipinos have a sweet, unusual gesture to greet their elders and outsiders. This beautiful gesture is called Mano (mano means ‘hand’ in Spanish), where they ask the elder’s hand by saying ‘mano po’ (meaning, your hand, please). Then they slightly bow and gently press the hand to their forehead.

Till now you have only heard about handshakes, hugs, and nose rubs. But imagine being sniffed at! As awkward as it sounds, the traditional sogi gesture in Tuvalu is a unique take on cheek kiss. Instead of kissing on the cheek, the people of Tuvalu press their cheeks against each other and sniff!

If you are already excited about the aforementioned ways of greetings, let’s head to Kenya for some more fun. Masai, a warrior tribe in Kenya, has an elaborate ceremony to greet people. They perform their signature Maasai Adamu, or jumping dance. They form a circle and dance while competing with each other as to who jumps higher. The rich mix of chants and dance along with their traditional attire is a sight to behold.

At some point in our lives, we all have created our own styles of handshakes, including finger snapping. But did you know that this is a part of Liberian tradition? The Liberian finger snap involves a regular handshake followed by a mutual snapping of fingers.

Let’s close this list with a traditional bow in Japanese style. When it comes to bowing down, the question is not just when to bow but also about how to bow and for how long! The Japanese take their bowing (known as ojigi) very seriously. There are different ways to bow. Long and deep bow means more respect to the other person. A short nod or a quick bow denotes a casual greeting.

These forms of greetings, although sounds unusual, is a stamp of uniqueness. These greetings narrate different stories about different cultures, history, and beliefs of people.

Which weird greeting gesture did you like the most? Do you also have your own style of handshake? Do tell us in the comments below.

Weird But True: 10 Facts About Plants That Will Blow Your Mind