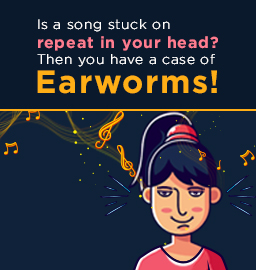 Is a song stuck on repeat in your head? Then you have a case of earworms!

Right in the middle of brushing your teeth, a song starts playing in your head, on an infinite loop for the rest of the day. Has this ever happened to you?

It is okay – Nothing is wrong with you. It is just your brain singing and such tunes are called earworms. An earworm is a repeating snippet of music, about 15 to 20 seconds long which keeps involuntarily playing in your head. About 90 percent of the population is bound to have an earworm crawl in at some point of time in their life.

The term “earworm” popped up in the 1970’s but it is actually a centuries-old phenomenon which has been mentioned in literature, musical pieces, and even pop culture. The strangest mention of these pesky things is in Mark Twain’s novel – “A Literary Nightmare” about a virus-like jingle which gets stuck in your head for several days till you manage to pass it on to someone else.

Despite being around for ages, scientists are yet to figure out what causes it and have come up with multiple explanations. According to recent studies, earworms are a type of mental imagery, like when you close your eyes and imagine an ice cream or you try to recall the sound of a bird chirping. The scientific term for this is Involuntary Musical Imagery or INMI, a type of auditory mental imagery over which you have no control, unlike the others. Now, why they are on repeat might be because of the part of your brain known as the auditory cortex, which gets activated when it listens to a song. When a tune sneaks into your brain it is almost like a cognitive itch for your auditory cortex which it has to scratch.

But, why are some songs more catchy than others for your internal jukebox? Well, there are reasons aplenty for this:

1. Maybe you recently happened to hear the song and this memory triggered an earworm attack.

2. If you have been listening to a song on repeat, or it keeps playing on the radio, the television etc then such songs have a higher chance of popping into your head and it gets harder to “Let it Go”!

3. Some songs have a strong connection to past/important events and if you find yourself in a similar situation then it is bound to trigger an earworm and bring back the memory. For instance, every time you see anything remotely related to Christmas, Jingle Bells will definitely play in your head.

4. It could also be associated with emotions. For instance, your go-to happy song “Hakuna Matata” has higher chances of sneaking into your head the next time you are jumping with joy over something.

Once this song pops in, then it becomes a habit for your brain and it cannot stop without playing it out. It is almost like tying your shoelace, once you start you have to go through with it. You can test this out right now, try singing “If you are happy and you know it, clap your hands!”, your brain will automatically continue with the rest of the lyrics and there’s a high chance of this popping up in your head in the coming days/weeks.

All of us must have had an earworm attack at some point of time but even though it is such a common occurrence, the mystery behind their existence is yet to be solved. Once scientists crack it, they may get closer to unlocking many unanswered questions – why do we sleep and dream, what is the physical form of consciousness and so many others. Until they do, you can try listening to some of these songs which are most likely to get stuck in your head:

(Maybe this will help you figure it out!)

A self love warrior and a believer of ‘hugs make life better’ – Nidhi Tom is a member of team StoryWeavers. Currently, she is in the pursuit of finding the right balance between making nutty travel plans, cozying up in her happy place-the bed and weaving fun and quirky tales. Do write in to storyweavers@byjus.com if you want to share your stories, thoughts or any random rants with her.