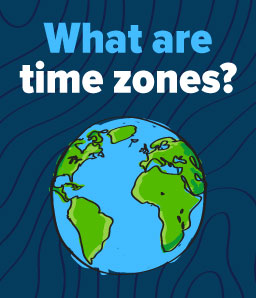 How Can You Gain or Lose Time?

No, Jane did not just crack the mystery of time travelling!. This infact happens to anyone who travels from one continent to another. The reason behind it is that Delhi is 3 and a half hours “ahead” of Paris. Similarly, every day when its 12:30 PM  in Delhi, it’s 3:00 AM in New York, 8:00 AM in London and 5:00 PM in Sydney. When it’s Monday in India, it’s still Sunday in some parts of the United States! While you may have heard all this before, do you know exactly what this means? What does it mean for a place to be a few hours “ahead” of another place? How can clocks and calendars in different places show different dates and time at the same time?

This complex question has a complex answer – Time Zones. A time zone is an area/ location on Earth that has a particular time that all citizens of that area can set their watches to. Different places have different time zones. But first, let’s understand why we need them.

The matter of differing time around the world

Earlier people used to understand the time of the day simply by looking at the sun’s position. When it is at 90° above the head, it is a 12’0 clock in the afternoon and so on. But as soon as trains came into existence, people started travelling to far away distances from their local area. It was then observed that different places experience 12’0 clock noontime at different times or as it can be said that the local time of different places was different. Hence the need to create a standard time for all emerged.

Today, areas as vast as a country, follow a standard time i.e. a time officially set by the law to be followed by the whole nation. It is based on the local time of a particular area in the country.  For example, a big country like India follows the local time of the city of Mirzapur in Uttar Pradesh. So when its midday/noon time in Mirzapur, everybody in India considers that time as their noontime.

How do you create a standard time for all?

Do you remember reading about the imaginary lines on the Earth – latitudes and longitudes? There lies the answer to this question. Since the Earth rotates from west to east, the longitudes lines or Meridians are used to calculate time differences across the world.

In 1844 a group of astronomers and representatives from 25 countries decided to set the norms for calculating the standard time for the whole world.  It was decided that the Prime Meridian or Greenwich Meridian would be taken as the central location i.e. it would mark the starting point of every Time Zone of the time zone map. So when the Prime Meridian of Greenwich has the sun at the highest point in the sky, all the places along this meridian will have midday or noon. As the Earth rotates from west to east, those places east of Greenwich will be ahead of Greenwich time and those to the west will be behind it.

How was the standard time of India decided?

How to calculate the time difference?

But that’s not all!

Countries that were almost on the opposite side to the Prime Meridian like the Philippines, New Zealand etc faced another challenge. They had a very minimal time difference from both the Eastern and Western side of the Greenwich Meridian. So mapping their time with the rest of the world was again confusing. To solve this, astronomers from across the world got together and created an International Date Line. They mapped this imaginary line at 180° from the Prime Meridian, that is exactly on the opposite side of the globe. Countries near it declared for once and for all to the rest of the world which time zone they wanted to be in and that’s how all the places across the world understand each other’s time.

But unlike the Prime Meridian,  the International Date Line is not a straight line, rather it looks a little zig-zag. That’s to accommodate the many islands that it passes like Fiji, Tonga and the Samoan Island.

You see if this line cuts through a country, it will divide the country into two dates. Hence the line was adjusted according to the size and area of the countries falling beneath it.

If you cross the line from east to west, you gain one day. If you cross it from west to east, you lose one day. 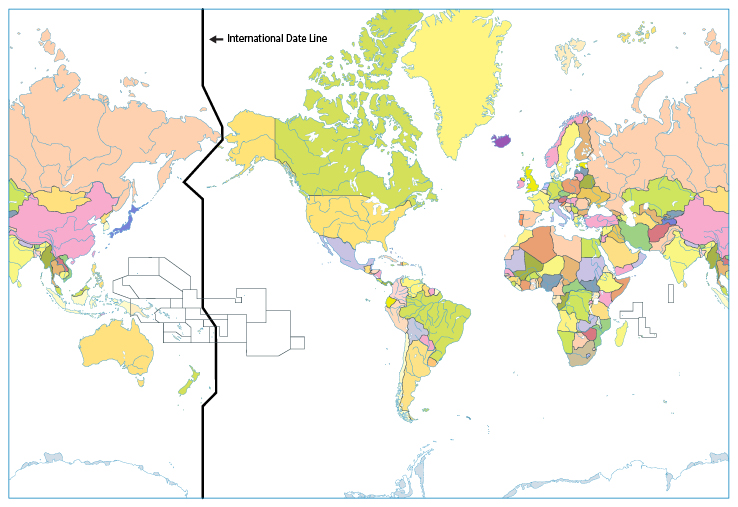 So that’s what it means when you say that Delhi is 3 and a half hours ahead of Paris. And so, Jane could cover a 9 and a half-hour long journey in effectively 6 hours!

If you liked reading this article, you may also like:

Why Is February So Odd This Year?

Is It Possible To Create Artificial Gravity In Space?