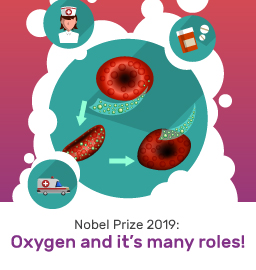 What did winners of the Nobel Prize 2019 for medicine find?

This year’s Nobel Prize for Physiology or Medicine was awarded to William G Kaelin Jr., Sir Peter J Ratcliffe, and Gregg L Semenza for their discoveries of how cells sense and adapt to oxygen availability in the environment. A member of the Nobel Assembly, labeled it as a ‘textbook discovery’, which means that it would be something students would learn at the most basic levels of biology education.

Now, what exactly is this discovery?

All animals, including humans, get energy from the food they eat. The process of converting food into energy is done with the help of oxygen. We have known this fact for many years now. But, what we didn’t know is how our cells respond or adapt to different levels of oxygen in the atmosphere. For example, oxygen levels at high altitudes are low. How does our body adapt to such conditions is the premise of this discovery.

Where and How does this happen in our bodies?

All of this process happens at the cellular level in our bodies. Oxygen travels in our body through the Red Blood Cells(RBCs) to the different tissues. The mitochondria in the cells then use oxygen to convert food into energy. In situations, where there’s a lack of oxygen, our body suffers from hypoxia, a condition where tissues are unable to perform bodily functions due to a lack of oxygen.

Our body’s automatic response to hypoxia is to increase the levels of the Erythropoietin (EPO), a hormone produced by the kidneys. This leads to increased production of RBCs(erythropoiesis).

What this research revealed was that the oxygen sensing mechanism is present in virtually all tissues, and not only in the kidney cells. While the kidney releases EPO, the rest of the cells adapt to hypoxia through a protein complex named ‘hypoxia-inducible factor’ (HIF). The research further answers the question of how different levels of oxygen regulate some of our most fundamental physiological processes.

Why does this discovery matter so much?

Our body’s response to different levels of oxygen affects many aspects of our physiology resulting in conditions like cancer, heart stroke, anemia, and heart attack. Cancer cells, for example, depend on blood supply to grow, and they can take over this oxygen-sensing system to create more blood vessels. The pioneering work of these three scientists and their teams has led us to have a more developed understanding of these common, but life-threatening conditions, and new treatments/strategies to treat them.

If you like this article, let us know in the comment section. For more such interesting information keep reading The Learning Tree and Keep Learning!