One of the most fundamental operations and a fundamental building block in mathematics is comparing numbers. Comparing numbers is a process of comparing two or more numbers and determining if one number is equal to, less than, or larger than the other numbers by using symbols. There are many scenarios in daily life where we make comparisons of numbers, such as estimating costs, distance traveled, number of students in different classes and many other instances. With the help of the BYJU’S Math worksheets, students can understand when and how number comparisons are used in everyday life....Read MoreRead Less

Comparing numbers is an important part of building an awareness about numbers in students. ‘Number sense’ is the ability of a student to recognize a number, its value and its relationship with other numbers. There are many uses for comparing numbers in daily life such as measuring ingredients while cooking, counting the distance while traveling from one place to another, or even to know the difference between the scores of multiple tennis matches.

Math is frequently viewed by students as a challenging topic that makes it tedious for them to tackle several problems at once. Problems on comparing numbers are solved by making it interesting for students through BYJU’S Math online interactive division worksheets.

Learning to solve mathematical problems requires the ability to manage your time effectively. Students can improve time management and problem-solving abilities by practicing comparing numbers with these worksheets. Students will be able to narrow down on the topics in which they need additional practice or conceptual comprehension with regular practice.

Every worksheet from BYJU'S Math is specifically created to make learning enjoyable for students. These worksheets are carefully designed with engaging questions and puzzles as well as some aesthetically appealing and vibrant images to hold the attention of students. 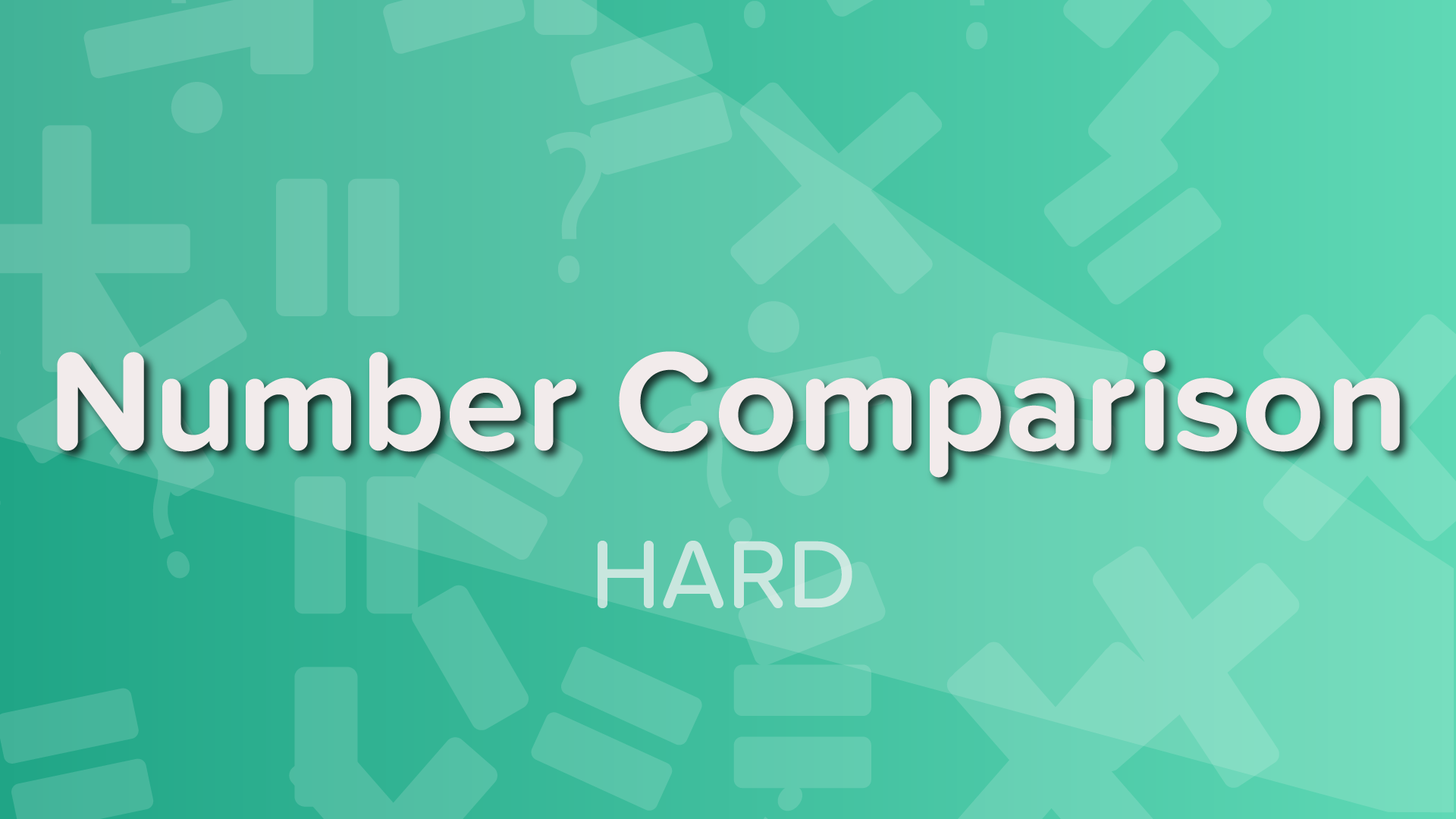 Hard
Comparison of Numbers
View All

Comparing numbers is a method that identifies if one number is equal to, smaller than, or larger than the other numbers. To compare two numbers, we write them using a few symbols. In our daily lives, we make comparisons of numbers, such as the temperature, the cost of things used on a regular basis, our height and weight, etc. A number with more digits is greater than a number with fewer digits, this is the foundation of comparing numbers. Numbers can be arranged in either ascending or descending order. The comparison of two numbers is done using the symbols, ‘>’ and ‘=’. Students learn how to deal with numbers and apply it to real-world scenarios by solving questions in the BYJU’S Math comparing numbers worksheets. The best way to avoid numbers confusing young minds is to make them work and solve a variety of problems in these worksheets. To keep students motivated, these arithmetic worksheets combine enjoyment with learning from which they can effectively internalize the concepts and enhance their capacity for problem solving. The BYJU’S Math worksheets are well structured, and it ensures that students quickly grasp the subject. According to the order of introduction of concepts from grades 1 to 4, the problems in each worksheet are based on the following comparing numbers methods and properties:

Click on the links below if you want to refresh your knowledge of comparing numbers as a concept.

Students now have the option of solving worksheets online by clicking on interactive comparing numbers worksheets. They can also click on the printable worksheets to download the PDF version of comparing numbers worksheets and solve problems at their convenience. Worksheets are aligned with the common core concepts to help supplement the concepts learnt in the classroom. So whether a student is learning the basics of division or is at an advanced level of performing division operations, BYJU’s Math worksheets can help give them the confidence to succeed.

How many levels does each worksheet have?

The prerequisites and difficulty level for the topic are taken into consideration when creating worksheets. Each worksheet has the word ‘easy’, ‘medium’, or ‘hard’, depending on how difficult the problems are in that worksheet. It is suggested that a student starts with the easy level worksheets before moving on to the medium and hard levels.

Is there any fee to pay in order to use BYJU’S Math worksheets?

No, there isn’t. All BYJU’S Math interactive worksheets are absolutely free.

Why is it important to learn how to compare numbers?

The comparing numbers worksheets is a building block for any student aiming to master advanced topics in math. It is useful in a number of everyday situations like comparing a certain quantity to other  quantities.

In math, the greater than symbol is represented by‘ > ’.

In math, the greater than symbol is represented by‘ < ’.

How can a student know the results of the worksheets once they submit their answers?

After the successful submission of worksheets, the student can instantly see how much they scored on a certain worksheet along with the respective answer key.

BYJU’S Math offers worksheets of various math concepts that are available in PDF format. A student or parent can easily open and print them using any free PDF tool.

Are these worksheets accessible both offline and online?