Adding a number to the ones place of a number is different from adding the same number to the tens place. This is because the value of a digit depends upon the position of the digit in a number....Read MoreRead Less

A place value is given to each digit of a number. Place value is the value indicated by a digit in a number based on its position in the number.

Here’s an illustration of the relationship between the place or position of the digits in a number and their place value.

Consider the number 4932, and the table shows us how each digit of the number has a specific place value according to where it is placed in a number.

This pattern applies to both bigger and smaller numbers, or even integers. Add ten to an integer say 3, and it becomes 13, we’re adding 10 ones to 3, pushing the number 3 to represent the number 13 with 3 ones and one tens. If we add 100 to 34, we have 134, which gives us a number with 4 ones, 3 tens and 1 hundreds. In the same way, we can create bigger numbers by adding ten hundreds, which is equal to one thousand. 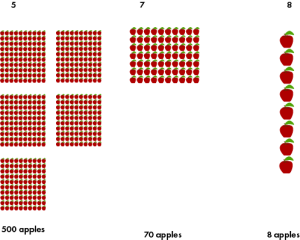 From both these representations we can observe that more equals bigger, and less equals smaller.

3 is greater than 2, as shown by the “greater than” or “more than” sign, and 2 is less than 3, as indicated by the “less than” sign. We draw these comparisons to understand the value of the numbers provided.

What we will observe next is  what happens when we add one to a given number, especially the change in the number, according to its place value.

We can take the same example of 578 once again. If we were to add 1 in the units or ones place, this is how the number would look like. 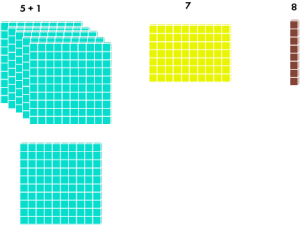 In each of these cases adding 1 to the different numbers that occupy in the specific place values in a number changes the number in different ways. We can also notice that this is addition and adding always increases the value of a number.

Johny bought 9 chocolates using the pocket money he saved up. As he came home, his aunt and uncle who came for a visit gave him 11 chocolates. Later that day, Johnny went to the local fair where he took part in a competition and won 888 chocolates. Fill in the table step by step to help Johny keep track of the total number of chocolates he has.

Johny bought 9 chocolates initially. We can place it in the column labelled “ones”, as it is a single digit number.

Johny has also won 888 chocolates at the fair. “8” is written on each column of the table.

When adding the total number of chocolates he has so far, we need to add one, nine and eight, which gives us 18, which is 8 ones and one tens.

One gets carried over to the hundreds place. Now, one plus eight is nine, which is nine hundreds.

Therefore, the total number of chocolates we get is 908. Johny has a total of 908 chocolates.

568 students were sitting on benches allocated for them across different halls in a building. If each hall holds 100 students and each bench holds 10 students, interpret the number of students in each of the following scenarios.

1. Three benches were added to one of the halls. How many students are totally in the building?

2. Two extra halls were opened for students and they were completely occupied. How many students were there in the building totally?

Table to represent the total number of students when three benches were added:

If two halls were occupied with students this means that two times 100 students were added to the building.

Table to represent the total number of students when two halls were opened for the students:

Janice made 120 cupcakes in the morning, of which 87 cupcakes were sold.

Place value chart of the cakes sold and the difference of 33 cakes.

Janice made another batch of 60 cupcakes in the afternoon.

Table showing the number of cupcakes that were there after 60 cupcakes were made.

Finally, Janice was able to sell another 90 cupcakes.

Therefore, Janice has a total of 3 cupcakes left.

What is the point of using base ten blocks?

Base ten blocks give a physical understanding of the place value of numbers.

Why can’t 10 blocks be placed in the ones place column?