Fluency and Strategies for the Addition of Numbers (Definition, Types and Examples) - BYJUS

Fluency and Strategies for the Addition of Numbers

Fluency and Strategies for the Addition of Numbers

Adding two numbers is very simple. You have two blue toffees and three red toffees. If you are asked the total number of toffees that you have, you need to add the numbers together.

The addend is the name given to the two numbers that are added together. Let’s discuss what addition is all about. We are given 2 blue toffees and three red toffees. If you are asked the total number of toffees, what do you do? 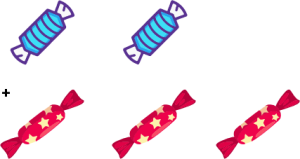 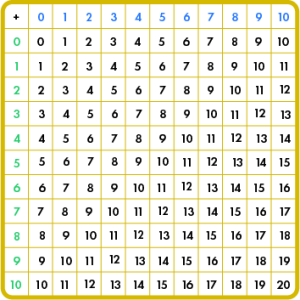 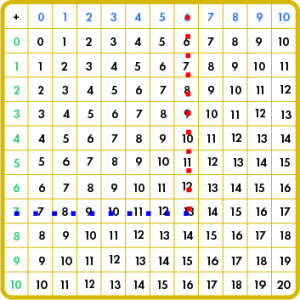 You can try this out for the other numbers as well. Add a number by itself and let’s see what the result looks like.

By adding the numbers together, we get double the value. Now we will trace the result along with this table like we did before and see what we get. 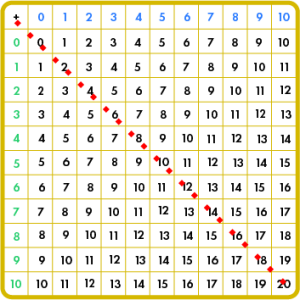 As you can see, the line cuts the entire table in the middle.

Take a look at the sum of these numbers.

We already know that three added to itself gives six. Now, if we wish to obtain 7, we can add one to the sum of three plus three.

In order to obtain 5, we deduct one from the sum of three plus three.

You can add more than two numbers together. Let’s see what the answer looks like if we had violet toffees also added to what we have. 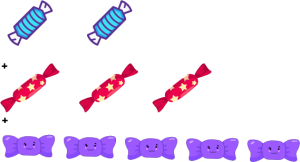 This gives us a total of ten toffees. 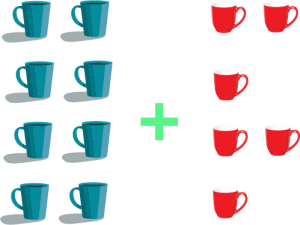 There are eight blue mugs and six red mugs. Adding eight and six together, we get 14. So the answer is 14.

Example 2: Alan bought 5 toys from a garage sale and later bought five more from a toy shop. Later, Alan gave away one of his toys to his best friend. How many toys does Alan have now?

As Alan gave away one toy to his best friend, we can remove one toy from the total number of toys.

So the answer is 9 toys.

Why do we need to learn addition?

Addition is one of the most basic mathematical operations. For something as simple as calculating the total amount to be paid at the mall to complex mathematical calculations where the speed and velocity of rocket ships are calculated, addition is constantly used.

What is the relation between addition and multiplication?

In simple words, multiplication is repeated addition. If one has to find out three multiplied by two, the other way of phrasing the question is what is the answer we get when three is added to itself twice?