What is Measure of Variation in Statistics? (Examples) - BYJUS

A data set can have a variety of values in it. The spread between the numbers in a data is known as variation. Learn the terms related to variation and the steps involved in finding the variation of data in a data set. ...Read MoreRead Less

About Variation in Statistics

Measure of variation is the way to extract meaningful information from a set of provided data. Variability provides a lot of information about the data. and some of the information it provides is mentioned below:

What are measures of variation in statistics?

The way of showing the dispersion or distribution of data items in statistics is known as a measure of variation in statistics. Low variability in data means that it is very consistent and accurate whereas high variability means data is less consistent for the user or statisticians.

There are some types of statistical measures that are shown below:

Range is the most common and easiest method to calculate the variation in data. In range, the user subtracts the lowest occurrence data from the highest data of the series of items.

Problem 1: We have a list of 12 students with their age. Find the range from the given data?

The image shown above shows the ages of students in different grades and the difference between the highest and lowest data entries is known as range.

Problem 2: Given below is the data of a company and we have to find the range of given data.

Solution: Highest value of given table is 89

Lowest value of given table is 11

The data is divided into four equal parts, or quarters, by quartiles. This data is divided in ascending order, with two lower quartiles and two upper quartiles. The first quartile, second quartile, third quartile, and fourth quartile are used by statisticians to divide their data into percentages: the lowest and second-lowest 25%, and the highest and second-highest 25%, which are referred to as the first, second, third, and fourth quartiles, respectively. The quartiles are represented by the symbols \( Q_1,~ Q_2,~ Q_3 \)  &  \( Q_4 \).

Problem 3: The top speeds of 12 cars are depicted in the dot plot. Find and interpret the data’s interquartile range.

Solution: The given number line shows speed (miles per hour) in ascending order:

Hence, we have to divide the number line into two quarters:

The midpoint of your data distribution, or the middle of your four quartiles, is referred to as the interquartile range (IQR), which is in the middle of the lower and upper quartiles. The IQR is a measurement of how evenly the data is distributed around the average.

The formula for Interquartile Range is given below:

Example for even items:

Problem 4: Let us consider there are even entries for the time taken to complete a task for 10 different people. 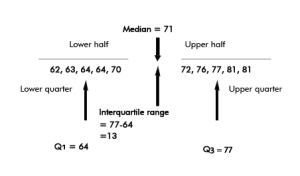 The formula for Interquartile Range for odd items is shown below in the image:

Problem 5: Let us consider there are even entries for the time taken to complete a task for 9 different people. 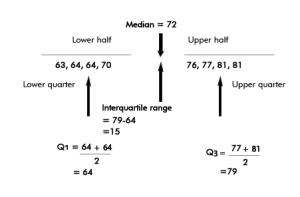 Problem 6: The top speeds of 12 cars are depicted in the dot plot. Find and interpret the data’s interquartile range.

Solution: The given number line shows speed (miles per hour) in ascending order:

Hence, we have to divide the number line into two quarters:

This means that the speeds in the middle aren’t more than 20 miles per hour apart.

Problem 7: Below are the midterm exam results for a small advanced english class. The percentage of correct items on the exam is represented by the score.

Find the range, quartile and interquartile range using the given data.

Variability describes how far points in a distribution or data collection are from each other and from the center of data items. Some terms for variability are spread, scatter, and dispersion.

What are the 3 measures of variation?

We looked at three types of variation measures: range, IQR, and variance (and its square root counterpart – standard deviation).