How to do Multiplication on a Number Line? (Examples) - BYJUS

Multiplication is a math operation which can be used in the place of repeated addition. The numbers that are involved in a multiplication operation are known as the factors. Multiplication of two numbers can be visualized with the help of a number line....Read MoreRead Less

There are three friends: Sam, Rob, and Zoe. They start counting their total number of fingers. Sam counted 1, 2, 3,…10 fingers in total on two hands.

Rob and Zoe also counted their fingers. There were 10 fingers for each friend. 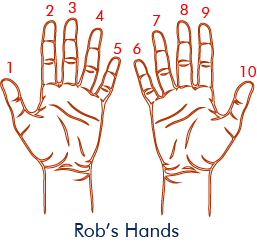 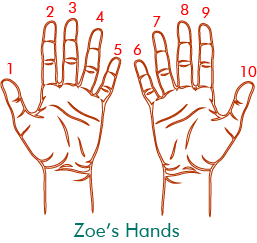 So, how many fingers are there in total?

So, the three friends have a total of 30 fingers.

This is one way of calculating the number of fingers, but you may wonder if there is an easier method. Well, there is. It is known as multiplication.

Using multiplication, we can easily find the total number of fingers without counting every finger.

Here, ‘x’ is the symbol of multiplication. 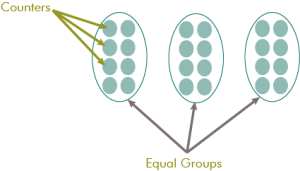 Equal groups: Equal groups are the ones having the same number of counters.

If a monkey starts from 0 and jumps 5 numbers each time, he will reach 5, 10, 15,… This is called skip counting. In other words, if we count numbers while skipping certain numbers, we are skipping counting.

Multiplication on a number line:

Steps for multiplying two numbers on a number line:

Step 2: Look for the number of counters and groups.

Step 3: Start with jumping from 0, and the size of the jump should be equal to the number of counters.

Step 4: Jump according to the number of groups. 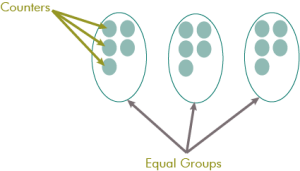 Now, make a number line starting with 0. Start with jumping from 0. Skip count by 5 three times.

The size of each jump: 6

Size of each jump: 7

Example 2: After the multiplication of two numbers on the number line, the result will be:

Find the number of groups and the size of each jump. Also, find the product of the multiplication.

The total number of jumps is 5. And the size of each jump is 4.

Therefore, the multiplication product is 20.

Example 3: John practices math problems for 2 hours every day. How many hours does he practice in 4 days? Draw jumps and label the number line.

John practices for 2 hours every day.

Number of days he practice = 4

Example 4: Smith has a photo album. There are 6 pages in it. Find the total number of images if each page has 3 pictures.

There are 18 pictures in Smith’s album.

Can we multiply two numbers using the number line?

How can you use the number line to skip count?

Draw a number line and then make jumps of equal size each time. Take note of the numbers. The obtained number will show a skip count equal to the size of the jump.

For example, if we start from 0, jump 4 numbers each time, we get the following series:

So, we obtained a skip count of the number equal to the jump size.

How do equal jumps on a number line show equal groups?

If we draw equal jumps on a number line, it shows a bunch of counts every time. Each bunch represents a group. For example, if there are 4 jumps of 5 counts each, it implies 4 equal groups having 5 counts each.