What are Halves, Thirds, and Fourths ?

Likewise, most shapes can be divided into halves, thirds, and fourths.

In the case of this triangle, each part is half of the whole, and the whole is made up of two halves. 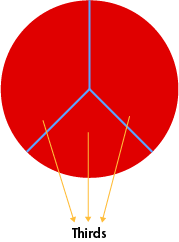 In the case of this circle, each part is a third of the whole, and the whole is made up of three thirds. 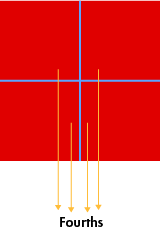 Finally, in the case of this square, each part is a fourth (quarter) of the whole, and the whole is made up of four fourths.

What are Equal Shares ?

What are Unequal Shares ?

When a shape is divided into different parts in such a way that the parts are not equal to each other, we get unequal shares.

In how many ways can Nicole cut this piece of cloth into two equal parts?

Example 2: If a circle is cut into two parts, will it always give us two halves?

Case 1: The line passes through the center of the circle in all of these cases. It is possible to divide a circle into two halves using this method in as many ways as we want (with slight variations in the line).

Case 2: The circles are divided into two parts again in these examples. But here, the line does not pass through the center of the circle. In this case, the two shares of the circle are unequal . That is, they are not of the same shape or size.

Hence, when we divide a circle into two parts, we may not always get two halves.

Example 4: Marie painted her wall with four different colors as seen in the figure. 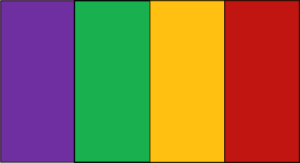 Solution: The rectangular wall is divided into four equal shares, each with four different colors.

What is the difference between equal and unequal shares?

Is it possible to create equal shares of a shape in multiple ways?

For certain shapes, equal shares can be created in multiple ways. Let’s consider a square as an example. The halves of a square can be obtained in the following ways.

In all these cases, the square is divided into equal shares of two halves.

Do equal shares of all figures have the same shape as the whole figure?