How to Represent Functions in Math? (Rules & Examples) - BYJUS

Functions are relations that derive one output for each input for an operation. Here we will learn about function rules, how to evaluate a function, and how to represent functions using graphs and tables with the help of some examples....Read MoreRead Less

About Representation of Functions

The relation between the two variables will be given by the equation:

How to write the Function Rule?

A function rule can be expressed in words (verbal form), an equation, table or a graph.

How to Evaluate a Function?

How to represent Functions using Graphs and Tables?

A function can be represented as a graph and a table.

If a function is represented as a graph on a coordinate plane, the set of values of the two variables of the function are the coordinates of the points lying on that graph.

From the graph of a function we can read the output (or y) value for a given input value by reading the y-coordinate of the point corresponding to that input value. 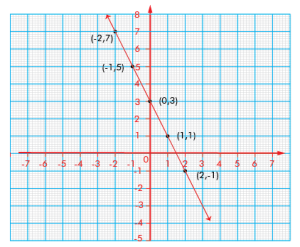 Example 1: Write an equation for the following function rule: ‘The output is twelve times greater than the input value’.

Writing in words: The output is twelve times greater than the input value.

Hence the value of function y is 14.

To plot the graph, make an input-output table to get the points that will lie on the graph of the given function.

For this, take the value of x as -1, 0, 1. Substitute these values in the equation and determine the corresponding values of y.

We will get the table as :

Plot the points and draw a line through them. The resulting line is the graph of the given function. 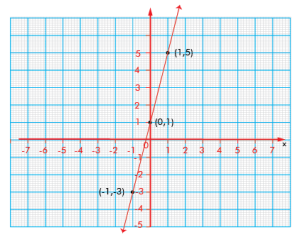 Example 4: Mary visits an amusement park and pays $10 for admission and $5 for each ride. Write a function rule to represent the total amount paid by Mary?

The total amount  is calculated by multiplying the number of rides by $5 and adding $10 to it.

Hence the total cost is dependent on the number of rides. So this can be written as a function in equation form as:

Example 5: There is $300 in a bank account and every week an additional $30 is added to it. Write a function to represent the balance in the bank account every week. Also find the total amount in the account after six weeks.

The balance is the sum of the initial amount ($300) and  amount added over the next few weeks.

Hence, the total balance is dependent on the number of weeks. So this can be written as a function in equation form as:

After 6 weeks the balance amount will be

What is a mapping diagram?

A mapping diagram is a way of representing a function rule. The set of inputs are paired with the set of outputs using two columns placed together. The values in the left column represent the input and the column on the right represents the output values.

What is the domain and range of a function?