Strategies for Addition and Subtraction of Multi-digit Numbers

Strategies for Addition and Subtraction of Multi-digit Numbers

There are many ways or strategies that are applied to the addition and subtraction of multi-digit numbers. Some are used for smaller or simpler numbers, while others are used for greater or complex numbers.

It is the foundational skill that students in lower grades must develop in order to tackle many tricky questions on addition and subtraction in the later grades.

These strategies that we’ll soon look at give students different ways to approach problems involving addition and subtraction.

Strategies for the Addition Operation for Multi-digit numbers

The addition operation for multi-digit numbers is a very basic operation that children need to learn in the lower grades.

In an addition operation, the numbers being added are called addends, and the result is called the sum.

There are many strategies for adding multi-digit numbers, such as:

The partial sum method is a 2-step process and uses the concept of place value in numbers.

In this method, corresponding digits in the place value column are added, starting from the left to the right, to generate the partial sums.

These partial sums are then added together to get the required sum. 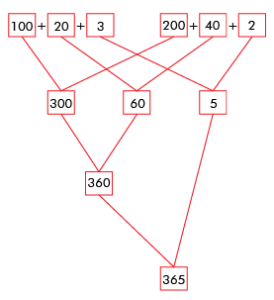 As mentioned above, the partial sum method is a two-step process.

In the first step, the digits in the place value column are added to get the partial sum of two numbers.

In the above figure, 300, 60, and  5 are partial sums obtained after adding the digits in the respective place value columns.

In the second step, these partial sums are added to get the final sum, 365.

As the name suggests, in this method, the addends are increased or decreased by a very small number to make the number simpler and the addition process easy.

Later, this addition or subtraction of a very small number is compensated in the sum to get the final sum.

Upon adding 1 to 229, it becomes 230, which makes the addition of the given numbers easy.

It is a basic mental strategy to add numbers. Usually, we take the larger number and count up from there.

First, we take the larger number of the two, which is 45 here.

It is generally used when the sum of the digits in a place column exceeds 9.

In the above example, the sum of digits at the ones place is greater than 9, that is, 5 + 6 = 11, hence a +1 is carried over is shifted to the tens place digit, 4. It is added to the digit 4 to make it 5. Then the usual addition process is applied.

Strategies for the Subtraction Operation for multi-digit numbers

The result of subtraction is called the difference.

Similar to addition, several strategies can be used to subtract numbers. 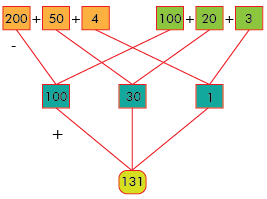 In this method, the minuend or subtrahend is either increased or decreased by a very small number, which is later compensated in the final result.

It is a very basic method of subtraction in which we count downward from the number from which another number is being subtracted.

Also, the other number being subtracted should be a smaller number.

It is the opposite of the regrouping method used in addition.

Since the digit at ones place of the subtrahend is 5, which is less than the ones digit 6 of the minuend, we will borrow 1 tens from the digit at the tens place, that is, 4, making it 15 and the digit 4 becomes 3 as it has lost one tens to the one place.

Now the subtraction can be done as usual.

Example 1: If Noah has 134 candies and Daisy has 247 candies, how many candies do they have in total?

The total number of candies both Noah and Daisy have is, 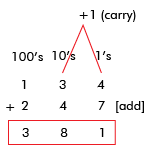 Hence, Noah and Daisy have 381 candies in total.

Newton buys a pack of toothpaste worth $2. If he gives the cashier a bill of $5, how much money will Newton get back from the cashier?

He spends $2 on the toothpaste.

Using the counting on method, we count down from 5 twice,

Hence, the cashier will return $3 to Newton. 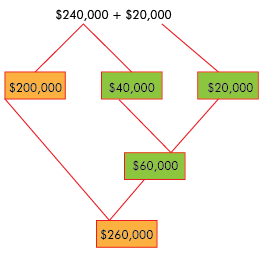 Elijah buys a pack of glitter pens for $21. If he gives the cashier a bill of $9, how much more will he have to pay him?

Hence, Elijah has to pay $12 more to the cashier.

What are the various types of addition strategies?

Below are a few strategies used in addition.

What are the various types of strategies for subtraction?

Below are some of the strategies used for subtraction.

In what ways are adding and subtracting important in everyday life?

Addition and subtraction are very important for certain activities in everyday life such as, making changes in the quantity of groceries in a supermarket, playing certain games that involve subtraction or addition of the points scored, keeping a record of finances, and so on.