Problems based on statistics are easily solved by organizing data in a table or what is also known as a tabular form.

Many problems are based on surveys done on several subjects and organizing them into some form, like a bar graph or as mentioned earlier in a tabular form.

What is Survey Data ?

Let us understand this with the help of an example.

Consider that you are conducting a survey in your class about the height of the students.

In this survey, you have to collect data that shows the height of students against their names.

There are many forms in which you can gather data through surveying.

Noah has some colored balls and he wants to arrange them in tabular form.

The chart or table he creates will have two fields corresponding to the color and the number of the balls he has.

Based on the above table, we can say that Noah has 13 colored balls of different colors.

Let’s understand this better with the help of an example. 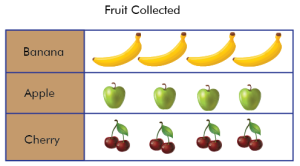 The above pictograph shows the number of fruits against the names of fruits.

An automobile salesman sold 3 cars on Monday, 5 cars on Saturday, and 12 on Sunday. It can be plotted as a bar graph in which the rectangular height represents the number of cars sold. 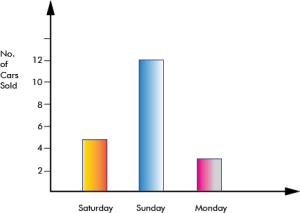 In a line plot, first we draw a line and then plot all the values of the gathered data on it.

Then we mark an “x” or a dot to represent data against some fields.

In the graph below, test scores obtained by students are plotted against their number. 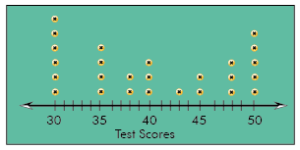 There is a table with the number of students already surveyed. How many more students does he need to survey?

From the given data, we can notice that the total number of students interested in musical instruments are:

If there are 14 students already taken up the survey.

From the survey involving 20 students, Newton needs the answers from six more students.

Use the data to complete the tally chart. 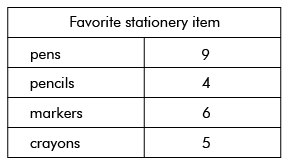 1.  Which stationery item is the favorite?

Look at this pictograph. 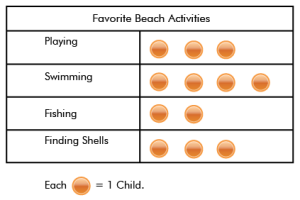 How many children chose the activity of finding shells as their favorite?

From the pictograph we can conclude that,3 children chose the activity of finding shells as their favorite.

A popular pizzeria is the best at making pizzas with six different toppings. They took a survey of every customer’s favorite toppings and recorded the result in the bar graph shown below. Use the bar graph to answer the questions that follow. 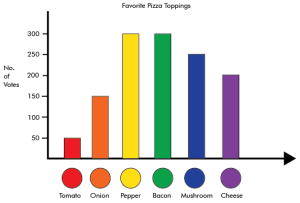 1.   Which is the most popular topping?

2.  How many customers have chosen either the onion or the mushroom topping?

3.  List the toppings in order from least popular to most popular.

A fire station is building a new garage for some emergency vehicles. The line graph shows us the comparison of the length of many garages and the number of vehicles that can fit within a garage of a specific length. Complete the sentence.

The garage should be more than __________m to occupy the most number of emergency vehicles. 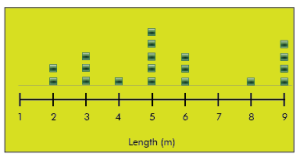 From the line graph, we can say that if the garage length is more than 5 meters, it can accommodate many vehicles.

How is data used in a survey?

Survey data is collected from a sample of respondents who take part in the survey.

It is comprehensive data gathered from a target audience about a specific topic.

Why are surveys the best way to collect data?