Writing Equations with One Variable

A mathematical expression is a phrase made up of numbers and symbols that are used in the place of unknown values or variables. We can find the value of a variable by equating an expression with another expression. Here we will learn the steps involved in solving the equations that have one variable....Read MoreRead Less

Writing Equations with One Variable

A mathematical equation is an statement in which the equal sign, =, is used to show that two expressions are equal to some resultant value.

In mathematics, an expression is a sentence that contains at least two numbers and one math operation.

A mathematical statement consisting of an equal symbol between two algebraic expressions with the same value is known as an equation.

The image below shows the formation of an equation: 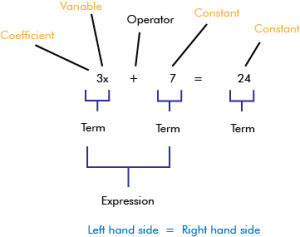 The student has to determine where to place the equal sign in a word sentence written as an equation and look for keywords or phrases such as “is”, “the same as”, or “equals”.

Example 2: For a wedding, ten servers will decorate 25 tables.

Each table is set up in the manner depicted. The total number of yellow and purple candles should be c. Which equation can you use to find c? 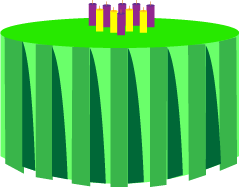 Write an equation using the word sentence of the given question:

Number of tables . Number of candles on each table = Total numbers of candles.

You are given the numbers of students who have been eliminated from a spelling bee and those who have not. You will be asked how many students participated in the spelling bee.

Let the students that started the game in the beginning be denoted as s.

What is a one-variable equation?

What are the 3 types of equations?

The equation of a line is given in the image below:

Does a linear equation have one variable?

For a straight line, a linear equation has a single variable. The only power of the variable is 1.