We know that variables are the unknown quantities in an algebraic equation. In some situations, the value of a variable might depend on the value of another variable. In such cases, the equation will have two variables. Here we will focus on how we can frame an equation in two variables with the given data. ...Read MoreRead Less

The equation y = x + 2 is represented in the table, and the graph: 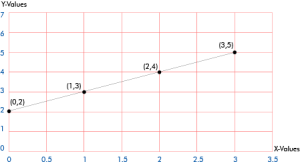 Solve the following equation to check whether the equation is forming a solution or not.

Substitute the values in the given equation:

Substitute the values in the given equation: 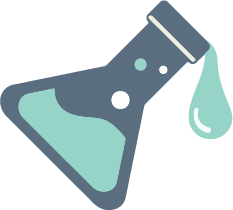 When x = 5, we solve the equation to find the value of y.

Write the given equation:

Substitute the value of x with 5.

There are 24 ounces of fluid remaining.

Lifting weights burns 200 calories for an athlete. After that, the athlete works out on an elliptical trainer, burning 10 calories per minute. Create an equation that represents the total number of calories burned during the workout and graph it. 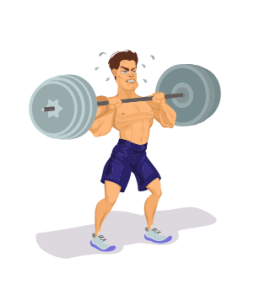 Write an equation using a word sentence of the given question:

Let c be the total number of calories burned and and m the number of minutes on the elliptical trainer, respectively.

When graphing the equation, keep in mind that the total number of calories burned is proportional to the number of minutes.

Create a table and plot the ordered pairs with minutes m, on the horizontal axis, and calories c on the vertical axis. After that, draw a line that connects the points.

Now, draw a line connecting the points on the graph:

A train travels between two cities at an average speed of 40 miles per hour. Make a graph and write an equation that represents the relationship between the time and the distance travelled by the train. How long does it take the train to travel 220 miles?

Let r be the speed of the train represented as 40-mile-per-hour speed.

Consider d = 40t as the equation that represents the relationship between the time and the distance travelled by train using the distance formula.

A table can be created that mentions the time and the distance:

The graph below will show the points in the table: 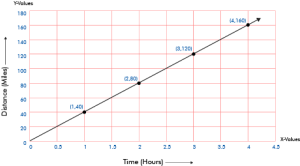 Substitute the value of d with 220.

Using the division property of equality,

Thus, the train will take 5.5 hours to complete a distance of 220 miles.

What is the relationship between two equations?

A two-variable linear equation is defined as a linear relationship between x and y, or two variables, in which the value of one is dependent on the value of the other.

How do you solve an equation with multiple variables?

When solving multi-variable, multi-step equations, the first rule is to make sure you have the same number of equations as the number of variables in the equations.

Then, for one of the variables, solve one of the equations and substitute that expression into the other equation.

Give an example of an equation.

A mathematical statement that is made up of two expressions brought together by an equal sign, is called an equation. 2x – 6 = 16 is an example of an equation. We get the value of the variable x as x = 11 when we solve this equation.