Students should make use of the AP Board SSC Class 10 Social Studies Question Paper 1 2017 in PDF while solving the question paper. It will help them to evaluate their answers and rectify their mistakes. To help students, these solutions are correctly solved by subject matter experts after a thorough analysis of the topics.

Solving previous year question papers will help students to get an idea of the exam pattern, weightage of marks, important questions, types of questions, etc. There is a chance that these questions might be repeated in the upcoming board exam. 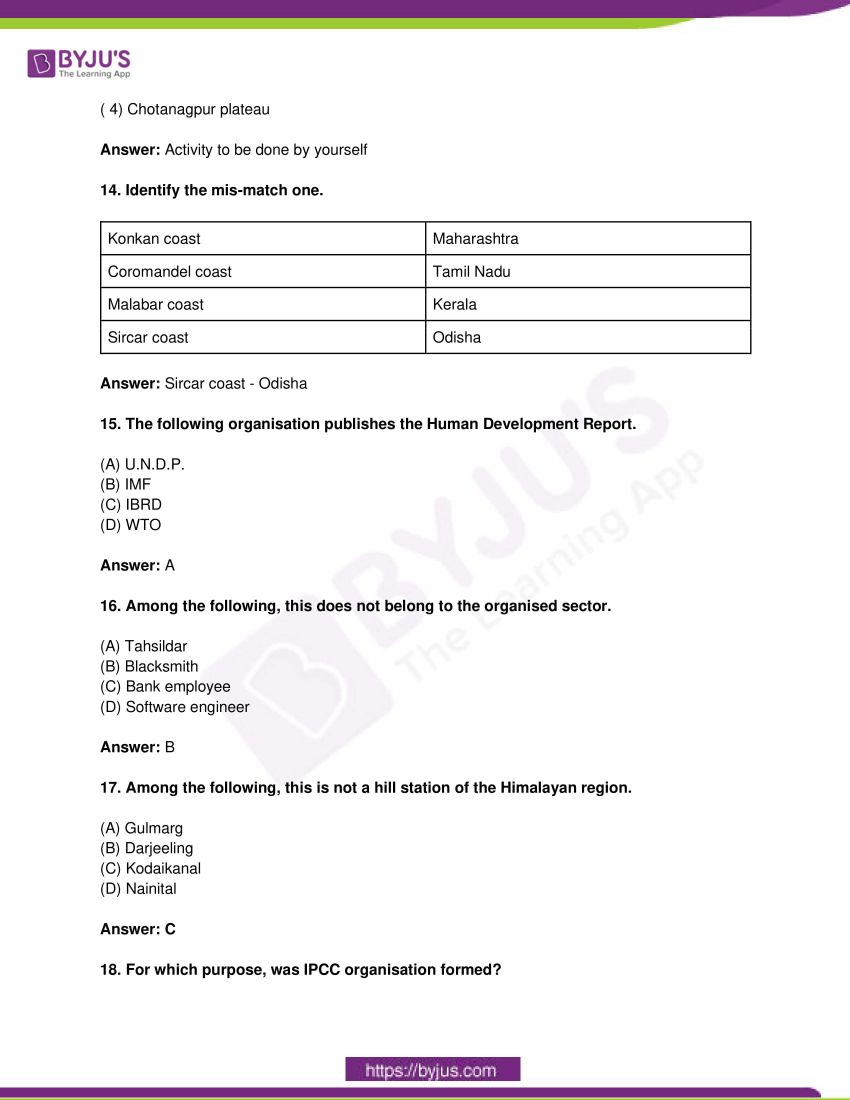 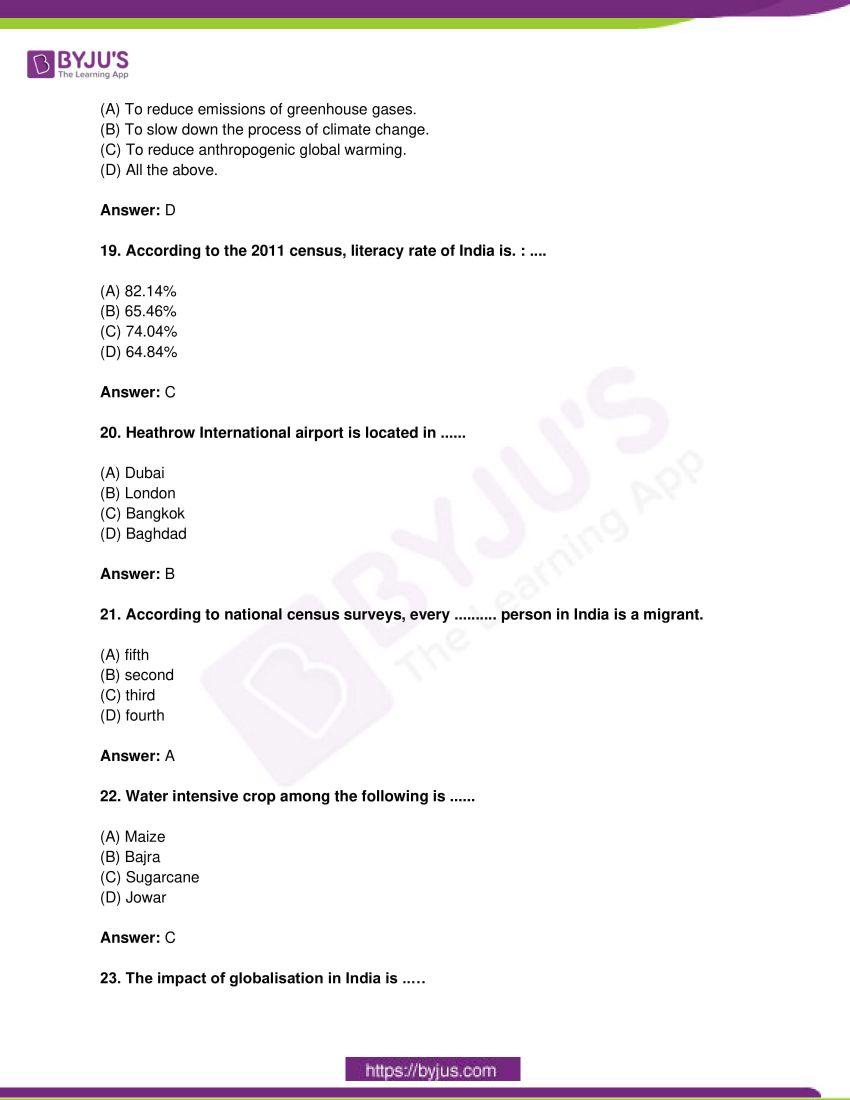 1. What is the reason for October heat?

Answer: The reason for October heat is

2. The rise of 2°C in average temperature results in a rise of one meter in sea level by early next century. Write any two slogans on the control of global warming.

Answer: Two slogans on the control of global warming are

3. When the fertility rate is near 2, what does this imply?

Answer: Fertility rate is the number of children a woman has on average. So if it’s 2 they would on average have 2 children in their lifetime.

4. What is the main theme of Rachel Carson’s book ‘Silent Spring’?

5. What do you learn from the schooling revolution in Himachal Pradesh?

Answer: A schooling revolution took place in Himachal Pradesh which was once considered a backward area. The literacy rates rose from 21% for boys and 8% for girls in 1961 to 94% and 86%, respectively in 1991. There is a primary school every few kilometres and the student-teacher ratio is 25:1. The education department has also introduced co-curricular activities. The expansion in education has been based almost entirely on government schools. This has been achieved despite the unfavourable settlement pattern and high involvement of child labour.

The reasons for this are:

6. Study the following graph and answer the given questions 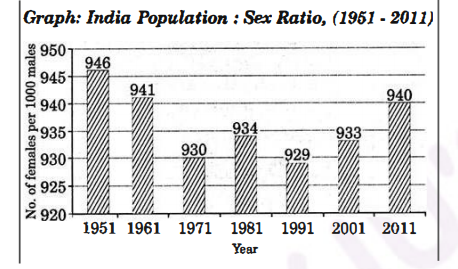 (a) In which year was the highest sex-ratio recorded?

(b) Identify the reasons for low sex-ratio in India.

Answer a: In the year 2011, the highest sex ratio was recorded.

Answer b: The reasons for India low sex ratio include:

7. Convert the information given below into a pie-chart (rough diagram). Write your observation.

Answer: The answer for this question will be answered soon.

8. How do you justify the statement ·: “Public Distribution system can ensure food security for people”?

Answer: FCI distributes the food procured from the farmer through government-regulated ration shops. It is called the Public Distribution System (PDS). Ration shops also, known as Fair Price Shops, keep stock of foodgrains, sugar, and kerosene for cooking. Rationing in India was introduced during the 1940s against the backdrop of the Bengal famine. Public Distribution System (PDS) is the most important step taken by the Government of India towards ensuring food security. From June 1997, Targeted Public Distribution System (TPDS) was introduced to adopt the principle of targeting the ‘poor in all areas’. In 2000, two special schemes were launched, Antyodaya Anna Yojana (AAY) and Annapurna Scheme (APS).

9. Study the following map and answer the questions given below. (a) In which state do the south-west monsoons enter first?

(b) When do the south-west monsoons reach Gujarat?

Answer a: Kerala is the first state where south-west monsoons enter first.

Answer b: In Gujarat monsoon arrives by the third week of June.

10. Describe any four of the major relief divisions of Indian landmass.

What is the meaning of international migration? Identify the reasons and consequences of it.

Answer: The four major relief divisions of Indian landmass are:

Answer: Movement of the population from one country to another, across the international borders is called international migration.

The reasons for International Migration are as follows:

The consequences of International migration are:

11. “While the service sector has grown, all service sector activities are not growing equally well. Service sector in India employs many different kinds of people. At one end there are a limited number of services that employ highly skilled and educated workers. At the other end, there are· a very large number of workers engaged in services such as small shopkeepers, repairpersons, transport persons, etc. These people barely manage to earn a living and yet they perform these services because no alternative opportunities for work are available to them.”

Q: “The life conditions of all the people in the service sector are not the same.”­ Comment.

“The current laws about groundwater in many states are both outdated and inappropriate. They were developed at a time when groundwater was a marginal source of water. Today shallow and deep tubewells have the potential to draw a lot of water.’

Q: Write your comment on the judicious way of using an equal distribution of groundwater and suggest a few measures in this regard.

Answer: The life conditions of all the people in the service sector are not the same because:

Some of the measures on the judicious way of using an equal distribution of groundwater are as follows:

12. Increasing urbanization is not just about greater opportunities for people and the economy. It also results in many problems. – Express your attitude on the consequences of urbanization.

“Among producers and workers, the impact of globalisation has not been uniform.” Write your opinions on it.

Answer: The consequences of urbanization are:

Answer: Globalisation has benefited well-off consumers and also producers with skill, education and wealth. Many small producers and workers have suffered as a result of the rising competition. Removal of trade barriers and liberalisation policies of the governments to facilitate globalization have hit the local producers and manufacturers hard. Globalisation and the pressure of competition have substantially changed the lives of workers. Faced with growing competition, most employers these days prefer to employ workers ‘flexibly’. This means that workers’ jobs are no longer secure.

13. Locate the following in the given outline map of India.

(3) The most densely populated state.

(1) The capital of Meghalaya.

(2) The Prime Meridian of India.

14. Identify the mis-match one.

16. Among the following, this does not belong to the organised sector.

17. Among the following, this is not a hill station of the Himalayan region.

18. For which purpose, was IPCC organisation formed?

(A) To reduce emissions of greenhouse gases.

(B) To slow down the process of climate change.

20. Heathrow International airport is located in ……

21. According to national census surveys, every ………. person in India is a migrant.

22. Water intensive crop among the following is ……

23. The impact of globalisation in India is ..…

(i) Particularly the well-off sections in the urban areas benefited.

(iv) The greater choice before consumers

(i) The Indian government made the National Food Security Act in 2013.

(ii) National Institute of Nutrition is located in Bangalore.

25. This is not the aim of the Chipko movement.

(A) Protection of soil and water.

(B) Protection of forests.

(C) Protection of the environment.

26. The first state in India planned to shift completely to organic farming.

* Observe the following table and answer the questions from 26 to 31.

28. Based on the above table, which country has low per capita income?

29. The countries which have the same life expectancy?

30. The country with high per capita income.

31. The countries that have the same HDI rank.

32. To conserve the water resources for future generations

(A) Water resources to be treated as private property.

(B) Deep borewells to be dug.

33. These are associated with food security.

(D) All the above