With the help of the solved paper, students can analyze their performance and work on their strengths and weaknesses. To understand the exam pattern, weightage of marks and important questions, students should solve previous year question papers. By doing so, they can get an overview of the exact board question paper. In this article, we have provided AP Board SSC Class 10 Social Studies solved question paper of 2018 Part 2 for students to revise it before the exam. 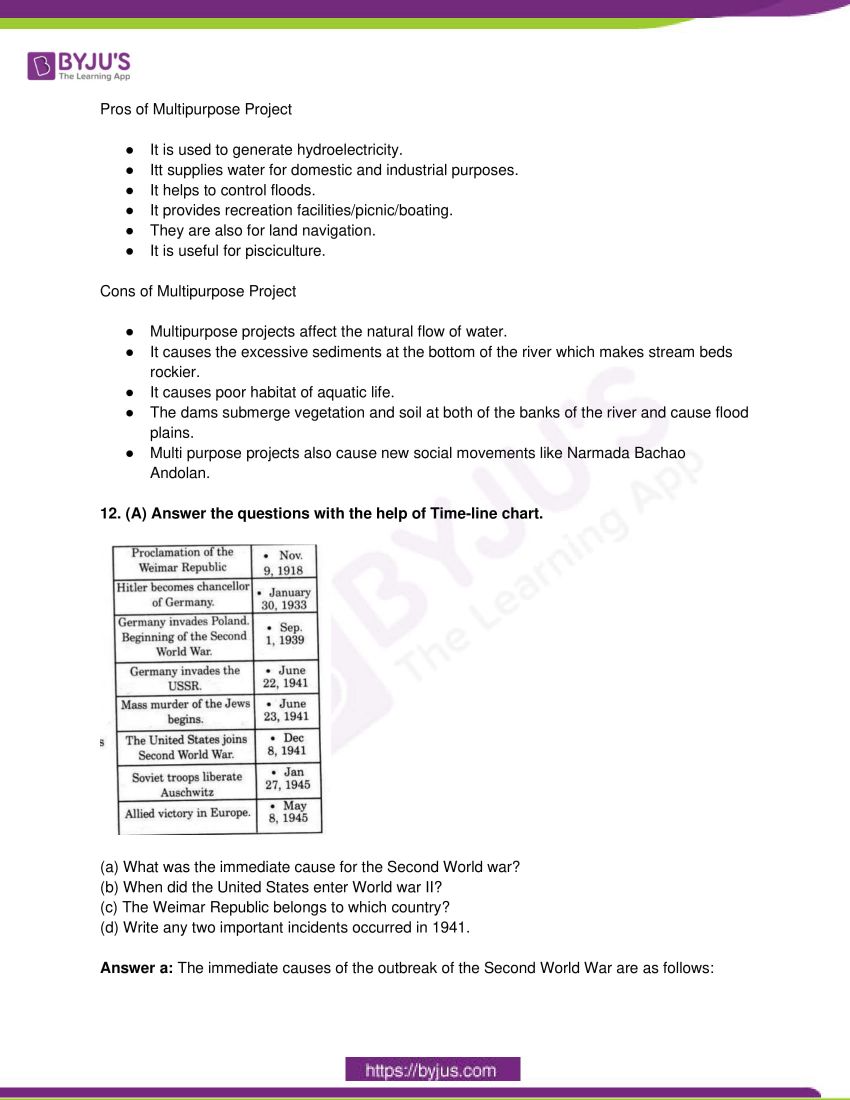 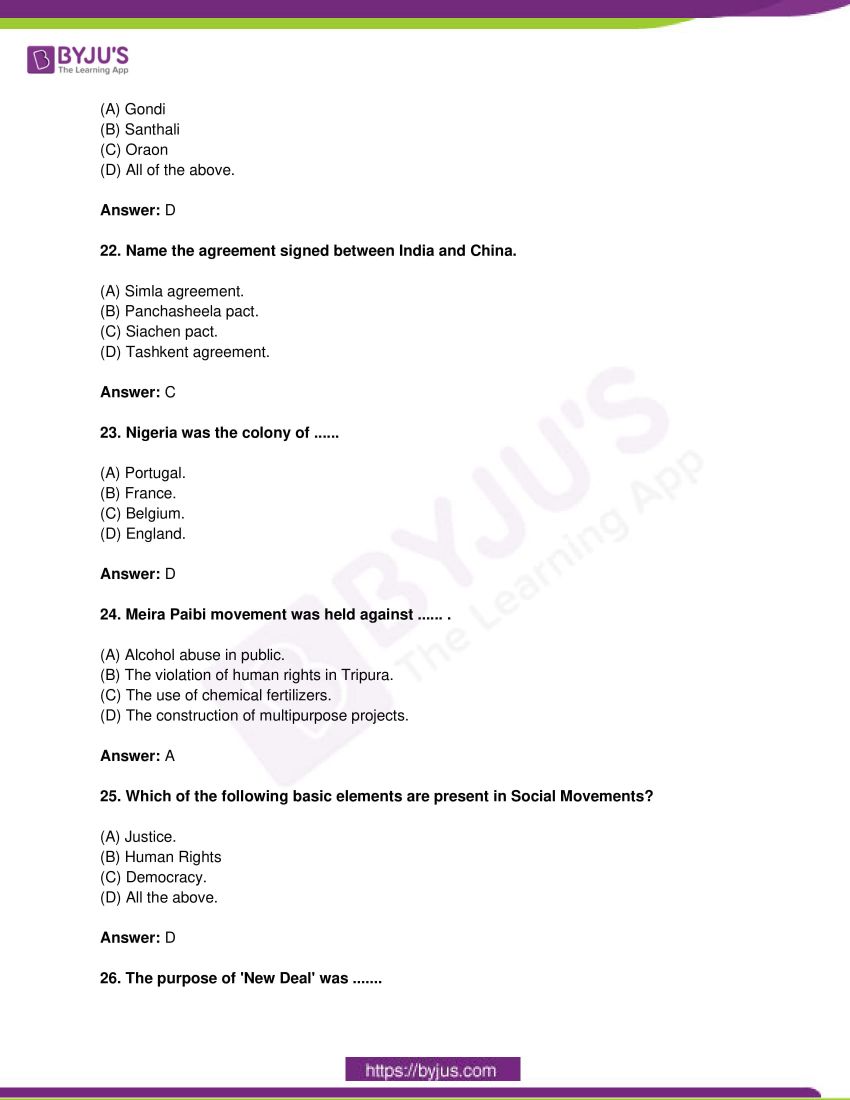 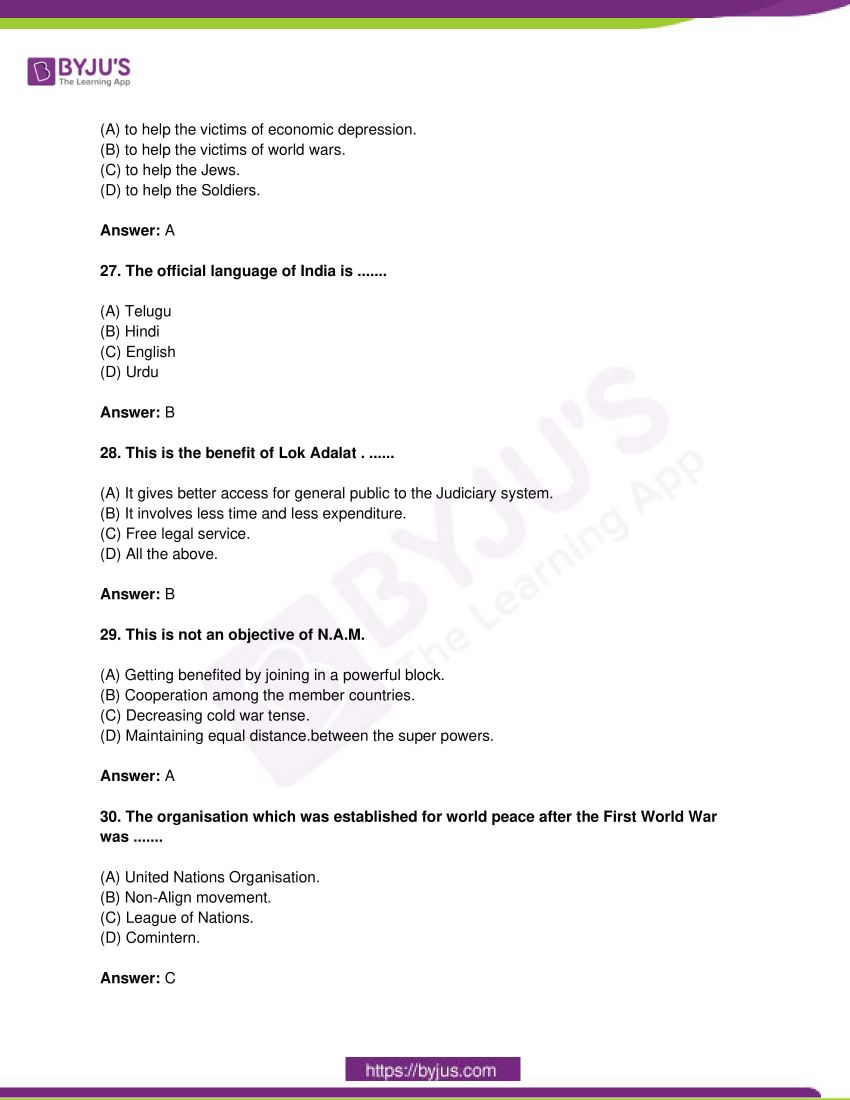 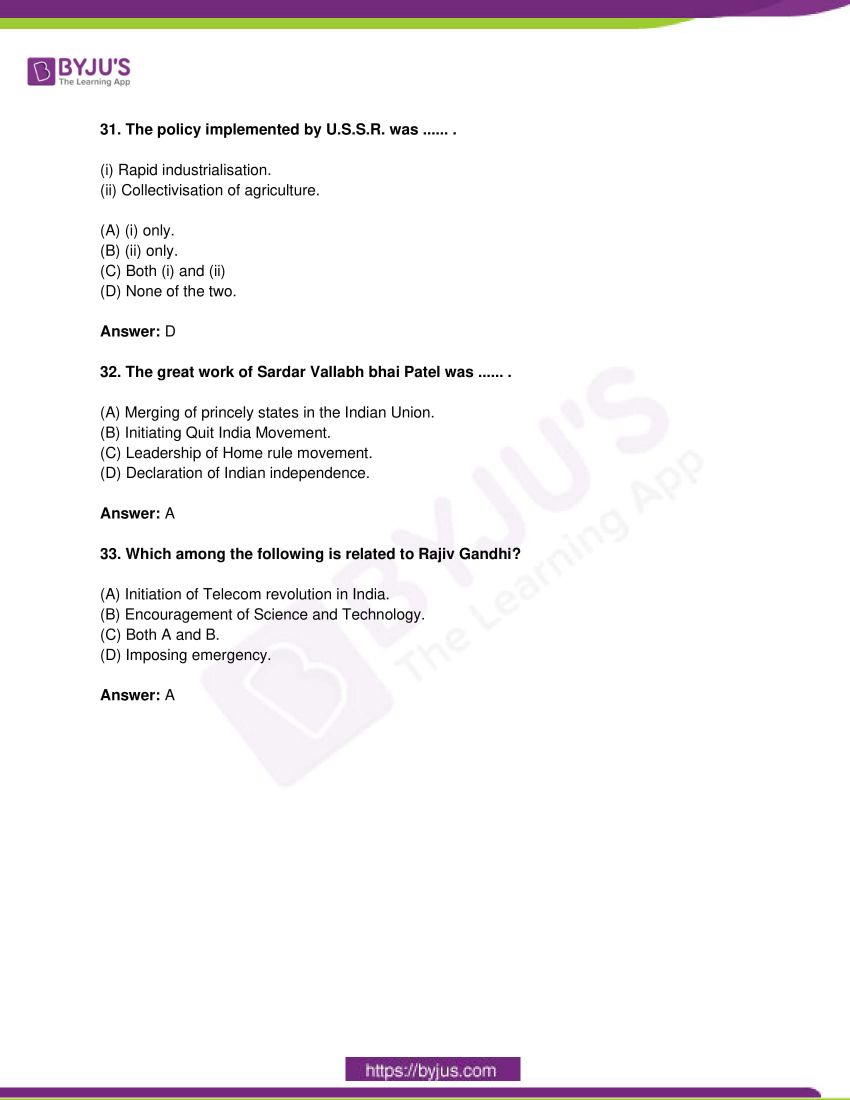 1. What were the main challenges before the leaders of the country in the early years after Independence?

Answer: India got its independence after the Second World War, so the stocks and resources were exhausted. There was violence in newly created borders since people had to migrate from one place to another. The mindset of national leaders was clashing and apart from this, there were language disputes as well.

2. Write any two objectives of U.N.O.

Answer: The two objectives of UNO are:

3. Write down the ill effects of reckless oil extraction in Nigeria.

Answer: Nigeria witnessed the slow poisoning of the waters and the destruction of vegetation and agricultural land by oil spills which occur during petroleum operations. But since the inception of the oil industry in Nigeria, more than twenty-five years ago, there has been no concerned and effective effort on the part of the government. The government gave control to oil operators, to control environmental problems associated with the industry.

4. Write two slogans on the necessity of peace.

Answer: The two slogans on the necessity of peace are:

1) Anything Violence can do, Peace can do better.

2) Peace brings the world together.

5. “Constitution is a living and changing document.” Would you agree with it? Justify it.

Answer: The Indian constitution is known as a living document because of the following reasons:

Indian Constitution can be changed according to the requirement and the needs of the present society and its future, it is not a constant and static document rather it is fluid and it can be changed by the process of amendment.

6. How did the education system in Vietnam contribute to the emergence of nationalist ideas?

Answer: The origins of education derive from the country’s belief in Confucianism as Vietnam’s philosophy of education was influenced by Chinese influence. Confucius believed that man is fundamental to the world, but he cannot be alone.

In society, he finds happiness. He also told himself that everyone has the same educational ability so that education should be open to all. Consequently, Vietnam was built to be a collectivist society, making people less important than the whole. Culture is extremely important so that education is seen as a means of establishing a culture of good citizens, rather than as a way of personal advancement.

7. Analyse the below graph and write your observations. Answer: The following graph shows the number of warheads in the USA and USSR over a period of time. From the graph, we can observe how the USSR suffered a setback from the late ’80s and ’90s when the country was dissolute to Russia. We can also observe that as the cold war ended the number of warheads also decreased subsequently for both the countries.

8. Read the map given below and answer the following questions.

(i) In which state was the Sardar Sarovar Project constructed?

(ii) Name the movement that was held against the construction of dams on river Narmada.

Answer i: The Sardar Sarovar Project was constructed in Gujarat.

Answer ii: Narmada Bachao Andolan (NBA) was held against the construction of dams on river Narmada.

Answer: A coalition government is a form of government in which political parties cooperate, reducing the dominance of any one party within that “coalition”. The usual reason for this arrangement is that no party on its own can achieve a majority in the election. A coalition government might also be created in a time of national difficulty or crisis (for example, during wartime or economic crisis) to give a government the high degree of perceived political legitimacy or collective identity, it can also play a role in diminishing internal political strife. In such times, parties have formed all-party coalitions (national unity governments, grand coalitions). If a coalition collapses, a confidence vote is held or a motion of no confidence is taken.

10. (A) “Right to Information Act resembles the true spirit of Democracy”. Explain.

(B) What steps should both India and China take to build lasting peace between the two countries?

Answer A: Right To Information, resembles the true spirit of democracy as in a democracy like India we, the people, have the right to question the working of the government. We can question them about the use of our money and other public resources. RTI is a medium through which we can achieve the above-mentioned goals. We can file an RTI in any government office and demand information regarding any public related affair. The government has to respond back to us within a fortnight.

Answer B: Both India and China should take the following steps to build lasting peace between the two countries

(B) Estimate the pros and cons of building Multipurpose projects.

Answer A: The rise of Nazism in Germany is because of the following reasons.

IV) Political Radicalism – The communists in Germany started a revolution on the pattern of Soviet revolution. Communists and Socialists became incompatible enemies and couldn’t unite against Nazism. The Germans gave full support to Hitler’s Nazi party, as the party was against socialism.

V) Hitler’s dynamic personality – Hitler had a dynamic personality. He was influential and was a great organiser, an excellent speaker and a tireless worker. His logic was convincing and his appeals touched the emotions of the people.

Answer B: The pros and cons of building multipurpose projects are:

12. (A) Answer the questions with the help of Time-line chart. (a) What was the immediate cause for the Second World war?

(b) When did the United States enter World war II?

(c) The Weimar Republic belongs to which country?

Answer a: The immediate causes of the outbreak of the Second World War are as follows:

Answer c: The Weimar Republic belongs to which Germany.

(B) Answer the following questions based on the below graph. (a) When did the Constitution come into force?

(b) In which decade, the least number of amendments had been done?

(c) Why does the Constitution need to be amended?

Answer b: In the year 1951-60 least number of amendments had been done.

Answer c: The Constitution of India is a very long and detailed document. Therefore, it needs to be amended quite regularly to keep it updated. Those who crafted the Indian Constitution did not see it as a sacred, static and unalterable law. So, they made provisions to incorporate changes from time to time. These changes are called constitutional amendments.

13. Point out the following in a given map of World.

(A) (a) The city in which the headquarters of the International Court of Justice is situated.

(b) The capital city of England.

(c) The country that was called as Dutch East Indies.

(d) The country of Danzing port

14. The Indian who played an important role in comintern, an international organisation setup to promote communist revolution in the World.

15. Which of the following is incorrect?

(A) The German Parliament – Reichstag.

16. Which of the following is correct?

(A) Northern Nigeria is dominated by Igbo tribes.

(B) The South Eastern Nigeria is dominated by Yoruba.

(C) The South Western Nigeria is dominated by Hausa – Fulani.

17. Why did the United States decide to intervene the Vietnam war?

(A) Because it felt that Communists would gain power in Vietnam.

(B) Because Vietnam attacked United States.

(C) Because France became the trading partner of US.

(A) form a separate country to Arabs.

(D) spread Christianity throughout the world.

19. The following provision is provided by the Constitution of India for social engineering.

(B) Special protection to minorities.

20. Which preamble of the Constitution refers to the word ‘Gender’?

21. Which of the languages are ignored at the time of State reorganisation?

22. Name the agreement signed between India and China.

(A) Alcohol abuse in public.

(B) The violation of human rights in Tripura.

(C) The use of chemical fertilizers.

(D) The construction of multipurpose projects.

25. Which of the following basic elements are present in Social Movements?

(A) to help the victims of economic depression.

(B) to help the victims of world wars.

(D) to help the Soldiers.

(A) It gives better access for general public to the Judiciary system.

(B) It involves less time and less expenditure.

(A) Getting benefited by joining in a powerful block.

(B) Cooperation among the member countries.

30. The organisation which was established for world peace after the First World War was …….

(A) Merging of princely states in the Indian Union.

33. Which among the following is related to Rajiv Gandhi?

(A) Initiation of Telecom revolution in India.

(B) Encouragement of Science and Technology.