The sum of biological and physical factors, along with the chemical interactions that affect an organism is known as the environment. All components of biosphere interact with each other in an organised manner. This organised interaction assures the survival of an organism that may result in the gradual evolution of the respective organism in the biosphere. Learn more about our Environment from AP Class 10 Biology Chapter 9 Our Environment.

In an ecosystem, the energy-rich food passes from producers to the consumers stepwise, with respect to their food relationships. A depiction of this is given below

Apart from the food chains, pyramids, ecological pyramids are another type of representations, which show the flow of energy from one organism to another.

The depiction of all the pyramids listed above are given below 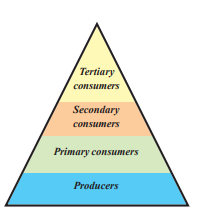 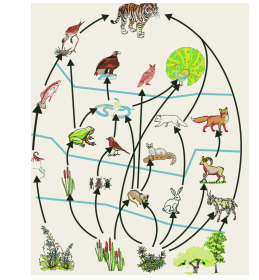 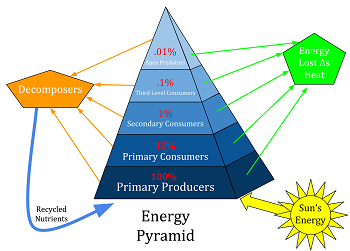 Steps Towards Prevention of Pesticides

The pesticides that we use to control pests have harmful effects on the ecology. It is impossible to completely prohibit the use of pesticides. A better solution would be to find effective methods of controlling pests which have far less harmful effects. Following are a few of the less harmful methods:

Solution: The tendency of pollutants to concentrate as they move from one trophic level to the next is known as Biomagnification.

Solution: Minamata disease was discovered in Minamata city in Kumamoto prefecture, Japan, in 1956 and was caused by the release of methyl mercury in the industrial wastewater from the Chisso corporation’s chemical factory. This highly toxic chemical bioaccumulated in shellfish and fish in Minimata Bay and the Shiranui Sea, which, when eaten by the local populace, resulted in mercury poisoning. While cat, dog, pig and humans deaths continued for 36 years.

Stay tuned to BYJU’S to get the latest notification on SSC exam along with AP SSC model papers, exam pattern, marking scheme and more.